I was once asked about my snow sculpting and explained that I always wanted to be a cartoonist. I just found the collection of Theodore Geisel’s World War II cartoons and snapped it up. I have a collection of a number of books by editorial cartoonists. For this quick pic I pulled out the ones from the 1940’s that particularly appeal to me. That Era just before my birth helped mold the parents of the Baby Boom. It became the prime time television programming I watched on our old black and white TV. It was time portrayed more faithfully in the anecdotes collected by Studs Terkel in his book The Good War. When Donald Trump talks about a special America he and his ilk that never lived through it have this period in mind. 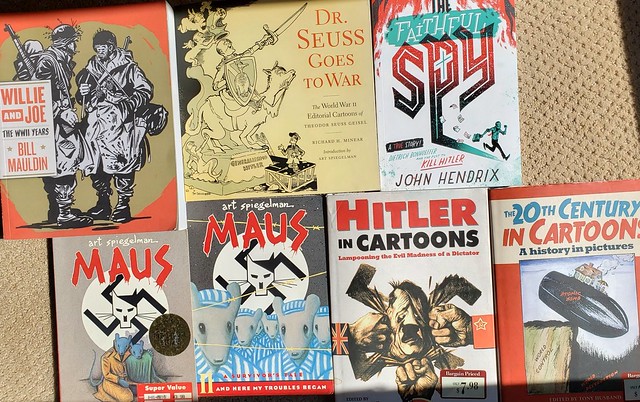 But the Trump ilk were quick to whine when the book Geisel illustrated “To think that I saw it on Mulberry Street” was yanked from recommended reading for elementary schools. The issue? The portrayal on one page of a stereotypical “chinaman.” Anyone wanting to see …..ist portrayals of Japanese will find them aplenty in Geisel’s war cartoons. But I don’t think Geisel would mind setting Mulberry Street aside these days. He was a creature of his times and the authors of the Rape of Nanking deserved the reckoning Geisel’s cartoons suggested was their due. The Trump ilk would have been the first to finger Geisel in the 1940’s as a dangerous man. All his cartoons were showing up in a magazine said to have been allied with the “Popular Front.” This was the direct opposite of Lucky Lindy’s America First Committee which is treated none too kindly by Dr. Seuss.