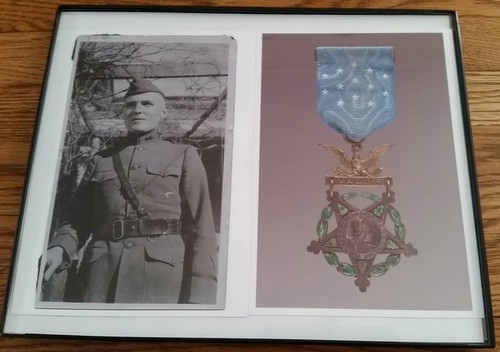 These were given to me on Veteran’s Day when the Philip Billard VFW Post 1650 of Topeka, Kansas, honored George Robb on the 99th anniversary of Armistice Day. I gave this speech for the occasion:

I would like to begin by thanking Andy Olson for inviting me to speak on this Veterans Day in memory of my grandfather George Robb a humble recipient of the Nation’s Medal of Honor. For years I have wanted to write a book about my grandfather. And this week in Topeka while rifling through the archives of the Kansas State Historical Museum I have discovered so much new information that I think that my wish will be far more likely to become reality.

My grandfather began a short lived diary upon setting out to New York City for embarkation to the trenches of World War 1. It began like this:

“On the 28th of December 1917 the author of this diary arrived in New York City over the Pennsylvania line.”

“He left his home in Salina Kansas on the morning of December 19th at 2 o’clock a.m. He could not help but wonder as he set forth for the station WHEN he would see that home again and what experiences he would meet with in the meantime but he could not help but feel that whatever they might be he would move equal to them – he MUST move equal to them for his home folks sent him forth, with expectation and full confidence that he would be a real Soldier and Home Folks are under no circumstances to be disappointed.”

I knew my grandfather was a very big deal starting at a very tender age when I would fall and scrape my knee and come to my mother crying. She would tell me “Harry, you’re grandfather was shot in the war and he didn’t cry.”

As time passed I would grow in awe of his reputation for courage, honesty, modesty and one other quality I had only heard about from my Mother – George Robb’s ability to write a good letter. Until Andy Olson arranged this little gathering I hadn’t read more than one example of such. Over the past 2 days I have copied a thousand of them at the Kansas state archives all left to the state by my Mother Georganne and her sister Mary Jane.

I will read one of them to you at the conclusion of this speech.

One of the first lessons I learned from my grand father was of humility. You can’t read any account of my Grandfather in the newspapers without their mentioning that he didn’t want any fuss made about his Medal of Honor. If I ever had any doubts about his worthiness they have been laid to rest after several month’s reading and research. In my estimation  George Robb was eminently  worthy of the Medal of Honor that was bestowed upon him.

Although I do not have time to elaborate now I’ll mention 4 related moments of his life and Kansas experience. 1. His next door neighbor in Assyria Kansas in childhood was an escaped slave. 2. He served as a white officer in the storied 369th Infantry a unit whose soldiers were composed of African American soldiers. 3. His study of history was such that he understood better than almost anyone else the role that African-Americans have played in defending this nation. And lastly, While living in Topeka his grandson (speaker points to himself) was one of the first to experience the new world after Brown vs. Board of Education when Loman Hill Elementary welcomed the students from the segregated Buchanon Elementary. All of these circumstances concerning my Grandfather have played a large part in my life and my thoughts and have continued so to this day.

If you check the files at the Historical Society you will find the speech that George Robb delivered to Topeka’s famous Saturday Evening Literary Club written about the time that Harry Truman integrated the United States armed forces.

He laid out all of the arguments that have been given by white politicians to dismiss the ability of African Americans to fight in the armed forces. He knocked them aside one by one. And of course there was his service in the trenches and his first-hand observation of his fellow black countrymen as they faced death at the hands of a determined enemy.

My grandfather was a man of his time as well as a man ahead of his time. I believe that he was trying to tell his fellow white Topekans to be comfortable at the prospect of black men serving with their sons in the United States military.

To reassure his audience he suggested that African-Americans were not yet equipped to be officers but that was years ago. Today, I can’t help but imagine my grandfather looking down from heaven much gratified to see that the Commander in Chief of today’s Armed Forces is half African-American just as I am gratified  that, like me, President Obama’s mother was a Kansan and a white one at that.

In light of our nation having endured one of its most divisive presidential elections I should mention one more thing about my grandfather. He liked Democrats even while he did everything he could to make sure they wouldn’t make a hash of the nation or the state of Kansas.

All of us would benefit from George Robb’s example as we move into the future. Much remains to be done to heal our wounds just as it was the case in my grandfather’s boyhood with Jim Crow and the denial of voting rights to most African Americans.

Upon returning this week to bury myself in the state’s archives concerning George Robb I had a couple of other things on my wish list. I wanted to visit my paternal grandmother’s old grade school now the sight of the Brown vs Board of Education National Historic Site.  I only got there with 25 minutes to spare of their opening hours yesterday. As brief as that stop was I was brought to tears listening to the voices of hate I remember  from my childhood coming from some of our Nation’s political leaders broadcast from a powerful display. In many ways they were tears of satisfaction comparing the state of America today with the conditions in my grandfather’s lifetime.

As you veterans know the integration of America’s military has had no small role in our progress.

As I  left the Historic Site I craved a dinner at Bobo’s Drive Inn which I remember fondly from my childhood. On the way to that restaurant I passed by the Stormont Vale Hospital where my brother and sister were born. As I approached the hospital I could see a dozen police vehicles lights flashing hugging the side of 8th Street. On the other side of the street people were holding up cell phones taking movies. Of course, I had to crane my neck to see. I saw a man the color of one of the non commissioned soldiers in the 369th Infantry lying on the curb surrounded by a dozen policeman. I did not watch the news last night so l do not know what transpired. It was a sobering reminder of the progress we have yet to achieve today.

At the beginning of this little speech I told you many of the reasons why my grandfather, George Robb, is worthy of the honor bestowed on him today 99 years after the end of World War 1. I told you I’d always heard he wrote a damn fine letter. Yesterday I read parts of a great many damn fine letters. I’d like to leave you with the letter he wrote to my mother who was a newlywed living with her husband in Arkansas City where I would be born about one year later.

This letter was a revelation to me. I have read many of the speeches my grandfather wrote and they were academic, proper and forbidding. I never got a letter quite like this and I can’t imagine many other fathers writing a letter to their daughters shortly after their marriage quite like this one. I hope you enjoy it.

But first I should preface this letter with this information. This was 1949. My Rock ribbed Republican grandfather had endured 20 years of Democratic Leadership by Franklin Roosevelt and Harry Truman. He hated it. And yet as my mother told me George Robb liked Missouri’s Democrat Harry Truman. It was a different age. Here’s the letter:

I take my Pen in Hand to indulge in some congratulations. I congratulate you upon having successfully navigated 21 years of democratic rule. With all those years upon your shoulders you should have the wisdom of a hoot owl.

I congratulate you upon being the daughter of Mrs. Robb and the sister of the globe-trotting Mrs. Sage.

I congratulate you that your father has not been in jail recently.

I congratulate you upon having a handsome husband. Feed him well so that he may remain sleek and and pleasing to the eye.

If there is anything else upon which I should congratulate you, let me know and I will be glad to fill in the gaps.

Your aunt Mae recently underwent a very romantic experience. One of the nights when it was about 6 below, at 4 o’clock in the morning her telephone rang. She got out of bed and paddled over the icicles in her bare feet to the phone. On the other end of the line and inebriated voice said, “Is Dorothy there?” Your aunt said, “To whom do you think you are talking?” The Jolly chap replied “Wake up the other girls. I have a couple of friends who want to be entertained.”

I do not exaggerate when I say that “Madam” Peppmeyer poked his eyes out of the phone and then threw scalding water upon him.  In fact, her vocabulary became so heated that the next morning the company found two or three telephone posts burned to the ground. I also congratulate you on your aunt, but it would seem to me that that was rather an abrupt and unsympathetic way to greet romance. No doubt had your aunt been sweet twenty-one instead of seventy-six she would have been a bit coy with the poor chap.

On the morning of the 10th, I will stand up your mother and Edith and have them sing “Happy birthday” to you.

May we all face our uncertain  future with such good cheer. That will be a little easier knowing that the defenders of our Nation’s military are composed of such as George Robb. I thank you all for your service and for remembering on this 99th Armistice Day one of your best and our nation’s best, my Grandfather 1st lieutenant, George Seanor Robb.