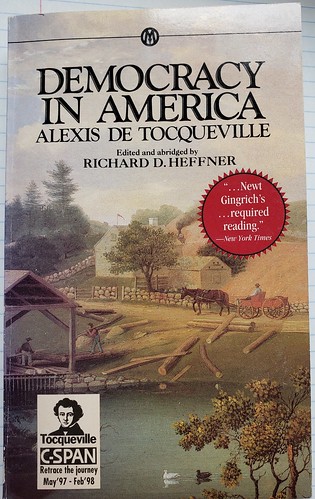 While Rudy Guilianni is the runaway worst advocate for Donald Trump a not so distant second is former GOP US House Speaker Newt Gingrich. I bought this paperback during the pre Putin Era when Russia seemed open to democracy and ex history prof Gingrich was using his bully pulpit in Congress to send the best philosophical tracts to Russians for their edification on Democracy. Everything Gingrich has done in the Trump years has pretty well cheapened this advocacy.

I bought this paperback back in that more optimistic time. I have yet to read it. It is evidence of Newt’s efforts to bring Russia into the sunlight. His name is emblazoned on the cover in the maroon sunburst as required reading. In the lower left corner is an advertisement of a C-Span special coming up in 1997-98. Not long after I bought this and stuck in my “to-read” pile Gingrich pretty much soiled his pants politically leaving open the question of whether he was an optimist or simply an opportunist?

The paperback is an abridgement of De Tocqueville a French political scientist who explored America decades before the Civil War. I’ve been thinking that if I could master the French language it would be a good target for me to tackle. The abridgment was first published in 1956 in an era when Civil Rights was very much on people’s minds, just like now. The one page summary at the beginning says this of Alexis’s work: “Tocqueville discusses the advantages and dangers of the majority rule which he though could be as tyrannical as the rule of the aristocracy. He analyses the influence of political parties and the press on the government, the effect of democracy on the social, political and economic life of the American people, and offers some startling predictions about world politics which history has borne out.”

Maybe Gingrich should read it again.