Submitted to the Duluth Reader a day late and a dollar short last week. So its only available here for the moment: 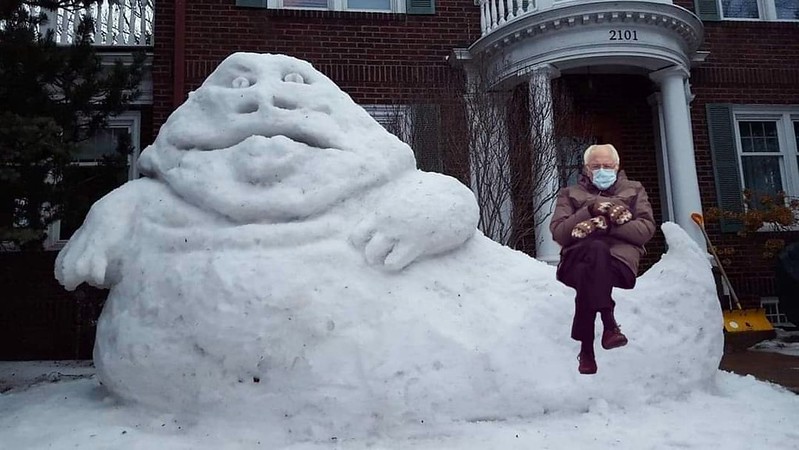 Claudia Welty was moved to learn a little photoshopping thanks to Bernie’s ubiquitous meme. I approve.

Thank God for the ubiquitous Bernie with Mittens meme that’s keeping some addled Americans in a better mood. I’m serious. Had Donald Trump’s ferociously incompetent stunts kept him in the White House I might have joined the new post-Presidential election tradition and bought a semi-automatic. I’d be outnumbered. Trump has 65 million well-armed supporters who think that it was Trump who was cheated. One can’t help but wonder if we will ever again be “one nation united under God?”

Joe Biden’s victory is obvious to me. Trump lost in states where the elections were completely run by Pro-Trump Republican governments. Believing otherwise is like believing that aliens have visited Earth despite the absence of any radio waves reaching us from beyond the sun produced by sentient life. Radio waves travel at the speed of light. Flying saucers? Probably a lot slower. But, we’re not talking about aliens hidden in Area 51. If the 2020 election was stolen our last 250 years as a nation has been a lie.

Every seasoned American politician of both Parties knows that there has been precious little cheating in our elections for the last century with one glaring exception. The exception is the South’s poisonous obstacles thrown at black voters in defiance of the 15th Amendment. Now that the white South has fully captured the Republican Party this legacy has become the ethic of the Party-of-Lincoln whose founder was himself refused a place on southern ballots in 1860.

My confidence in voters and election officials was confirmed in 1972 when Republicans were deathly afraid that newly enfranchised 21-year-old, anti-war, college students would swamp Republican candidates on campuses across America. Although I intended to vote for Democratic Presidential candidate George McGovern that year I had also joined the College Republicans. I’m a bit of a contrarian and I was sick and tired of college know-it-alls trash talking Republicans. That meant my family. Sure, Richard Nixon was not in any hurry to get us out of Vietnam but dammit, I spent my junior high years hearing my Republican Dad cuss out Democrat LBJ for the same thing. Everyone in my immediate family was voting for McGovern. Back then such quiet crossover votes were common and kept our politics in good balance. Both parties appealed to the political center instead of the lunatic fringe. Not so now.

I’d spent that summer helping Republican legislative candidates. When I got back to campus in the Fall I was determined to help beleaguered local State Senate candidate, Arnulf Ueland survive the landslide vote of thousands of Mankato State College students. There was no doubt that thousands of those voting for McGovern were likely to cast down ballot votes for democrats. (*Technically, in 1972 Minnesota legislative candidates did not run as Republicans or Democrats but the parties knew which was which) The students all knew about Nixon not the hapless North Mankato Mayor Ueland. I won those votes for him. A self-imposed 800ish-word limit requires me to set that story aside for a future column.

The honesty of 1972 was no exception. If I have learned anything in 19 personal campaigns for public office (16 defeats to 3 victories) stretching back to my first in 1976 it is this. Americans are fundamentally honest voters and ignorance, more than conniving, explain the very few errant votes they cast at the polls.

Because forty percent of Americans rarely vote I’m not surprised that their inexperience makes them vulnerable to conspiracy theories spread by well-funded rumor mills on the Internet and Fox News. There is money to made telling cockamamie stories about an America in the grip of a non-existent Deep State. Real politicians know better. Every Democrat and Republican sitting in Congress since the 2018 elections knows that. That’s why there was precious little difficulty in winning the acceptance of Joe Biden’s electoral votes from both Houses of Congress. Nonetheless, there were a lot of spineless Republicans who put getting reelected in 2022 over the truth of 2020. Undermining the nation’s confidence in the integrity of our elections was a small price to pay for their future prospects. But that too is a column for another day. Until then here are three take-aways on the spineless world of so many Republicans:

1. Today the GOP is a headless political party whose most potent leader faces financial ruin and a conviction for treason after suffering a Twitterectomy. If he further fractures his Party by starting a new one even deep red states will elect more Democrats.

2. The fearful Congressmen who voted against accepting Joe Biden’s electoral votes were practicing the cynical “first law of politics” which tells them that their primary duty is to get re-elected, faith in democracy be damned.

3.Northern Minnesota has one of these craven cowards, Congressman Pete Stauber.

I wish that I could wave a magic wand to make these problems disappear but I can’t. I can only hope that Joe Biden’s decency works some kind of magic. While I wait for that miracle I am grateful to Bernie Sanders for his curmudgeon-ly-ness and his precious giant mittens.

Harry Welty breaths an occasional sigh of relief at: www.lincolndemocrat.com