I first publicly registered my dissatisfaction with Second Amendment purists about thirty years ago with a letter to the editor. The Trib thought it provocative enough that they published it with the photo of a gun barrel pointed at the readers.

It generated some heat from critics and I’ll confess that looking back on it I regret one term I used. I criticized a “slavish” devotion to the Constitution. I had in mind the nit picky sort of cherry picking you might associate with Biblical literalists who like the Jehovah’s Witnesses make a fuss about a single passage like the line in the King James version of the Bible’s Old Testament that says the name of God is “Jehovah.” Never mind that this was a much later English word for a God who the original Hebrew writers tried to discourage their followers from even uttering out-loud. The point of the Constitution was that it could be amended and fitted to the desires of future Americans.

And for two hundred years the Supreme Court did not sever gun onwership from the notion of forming the Second Amendment’s militia’s. They were composed originally of a rag tag group of citizens with hunting rifles. It has only been in the years subsequent to my letter that a newly composed Supreme Court decided that militia’s were not part of the gun ownership right. This was the achievement of the NRA newly transformed from a rifle loving group of hunters to a handgun toting bunch of semi-vigilantes.

I trust the constitution’s fair application to citizens as far more vital to our protection than I do to some neighbor’s quick access to a gun. Like cars guns are tools that need regulation. Don’t run a red light. Keep your rifle in a leather holder. Big deal.

I have no sympathy for an NRA whose president spouts that any attempt to keep guns same is the action of “jackbooted thugs.” 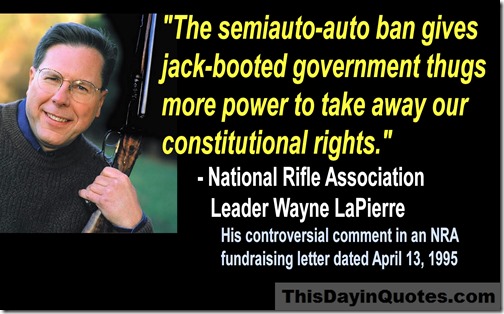 I have a couple collector’s rifles handed down from Grandfathers that never used them. I’m not a paranoid like Wayne Lapiere.

I’ve just gotten my questionnaire from them which will be ignored as they will almost certainly endorse Pete Stauber who had a colleague on the Duluth Police force killed by a disturbed man with a gun.

I’ll simply send them this picture of me in the wake of Sandyhook to let them know how unsuitable I would be a Congressman.