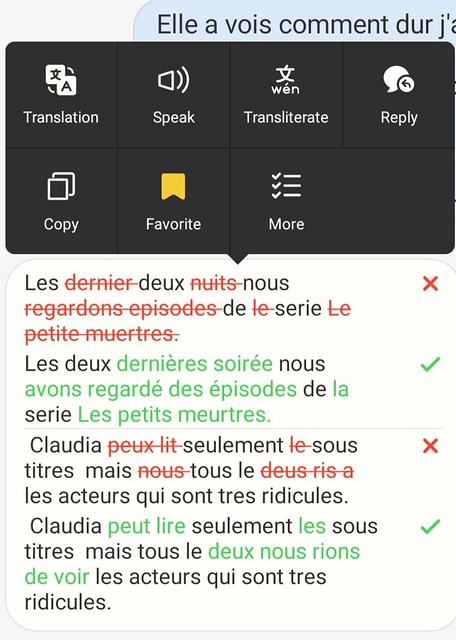 I am more impatient than ever with people who look down on those learning a new language. For example Americans who feel free to shame Spanish speakers for speaking their native language in a Burger King. Or look down on the people who pick the food that they buy for cents on the backs of those who pick it and then object when their highly discounted food costs might mean a few taxes to educate the children of their source of cheep food.

There is no single answer for why at the age of 67 I started to learn a new language. As you young man in high school I always thought learning a new language by moving into another country was the way to do it. It was my excuse for avoiding language classes like the plague until I had to take a dreary year of Spanish in my junior year of college to get a damned four year degree. As I recall I got one C and two D’s…….enough to graduate but significantly dent my GPA.

But at age 67 I had settled into a happy life in the US. I’d traveled beyond our borders but had never taken up residence anywhere. All the foreigners I knew spoke English. One spur to my starting was a lifelong desire to visit the spot where my Grandfather got the hell shot out of him on his way to being awarded the Congressional Medal of Honor in the trenches of Wartime France circa 1918 a month and a half before the Armistice. In preparation for that trip I began reading letters George Robb had written which my Mother and her sister carefully packed up for the Kansas State Historical Society. In one of them their father told his brother, an economist with a Yale Doctorate that he had decided to seek a Masters Degree in History from Columbia because he was not good at languages. Just about there and then I decided to learn French as I was nine months off from a 30 drive through of Northern France. That was three years from this week. And nine months on a language learning app did me very little good. So much for Duolingo’s claim that ten minutes a day can do the job……..Maybe if you stick to it for ten years but I was working closer to an hour or two a day for those first nine months and I was crap.

Another prompt was avoiding my Mothers’s Alzheimer’s by keeping my brain active. A few years earlier I had started to take up piano lessons but that petered out after a couple months. Why I’ve stuck with French for the last three years is anyone’s guess. I consider it an achievement in perseverance but Alzheimer’s may be a better explanation.

One more is my deep curiosity about learning. Tens of thousands of America’s brightest students take foreign languages if for no other reason than to get into “good” universities. Most never master another language but just keep a few grains of knowledge from their years plugging away at conjugations.

Duolingo has taught me a great deal but in surprising ways. Three years ago they were expanding into new languages and constantly experimenting with what they challenged their students with. They charge nothing except a modest monthly charge if you don’t want to see ads. I don’t want to see ads.

Well into my second year I had already tested other aps and sites for my learning. Duolingo is drill and kill to the extreme. Only a seriously dedicated person would use it year after year. But that’s what it takes to learn a new language. Children do it naturally but childhood is exciting and learning new words is gaining power and mastery over the world. In my early search for more painless ways to learn French I followed a link to a TED type talk by a young woman who had made herself a polyglot….a speaker of several languages. She offered some advice. Only learn one language at a time. That is not what a great many Duolingouists do. Many flit from one language to another achieving high scores but in all likelihood very little mastery of any of them. that’s not for me. I intend to be well spoken if not fluent in French before I die. In fact I should have just returned from a 45 day French class in Aix France. Covid 19 put it on hold for a year. I’ll head back now that a vaccine seems within reach.

And I will get another year of practice before I go back. I did find another app that has been a godsend. Its called Hello Talk. It too encompasses several languages. The screen shot above is a small part of my French practice today. Its one of roughly 1,000
words I exchanged with my French pen pal of the last ten months. S. S. was a teacher of young children and we are nearly the same age. She studied English for years in public school and for ten years found a English speaking German to chat with in English. She was not confident in her English speaking when we met but I have assured her she could get along famously if she was to spend a month in the US or England.

I hope to be able to do the same in a years time in Provence. Claudia will also be with me but its a French cooking class that she’s looking forward to. She mostly gave up on Duolingo right away.

You can see in living color one of my primary beliefs about learning. It requires mistakes. In the case of a language a lot of them made over and over again. S’s corrections are all over that post but as I’ve told S. I’m beginning to see what I did wrong after making them. The key will be to keep making fewer and fewer of them and doing the same while speaking. It turns out that learning to read a language and learning to speak it are two separate courses.

I haven’t decided just what to do if I become more competent in French. Maybe by the time I return from France a year from now I’ll have a better idea how to employ it. Or maybe not. In any case French is my wooden chair to keep the lion of forgetfulness at bay.

The quote that inspires me came from the polyglot who Ted talked her audience of happy babblers……“The best time to learn a new language is age five. The second best time is now.” The time for me is NOW!

NOTE: This and other recent posts were spewed out with no editing because my head needed a quick emptying.