What I wrote in today’s Duluth News Tribune:

President Donald Trump could perform one great service for our nation by leaving office without tweeting that it was stolen from him. Because Congressman Pete Stauber likely would disagree with this, he should be retired, too. Trump is the kind of leader our Founder’s always feared. They understood that democracy is fragile. America should have known this when Trump asked, “What do you have to lose?”

I helped keep the Party of Lincoln alive after Watergate by holding fast to my family’s beliefs. There seemed to be room for our ideals in President Ronald Reagan’s “Big Tent,” but Reagan’s successors broke his 11th commandment: “Republicans shall speak no ill of other Republicans.” Before Reagan was in the grave, Republicans began purging liberals and moderates.

For me there was still the Duluth School Board. Duluth has a charter school because I was there when its opponents sought to kill it. Several life-giving referenda, raising additional tax levies, passed because I helped the public accept them. And when a ruinous plan to trade teachers to pay for a grandiose rebuilding of schools was started without a public vote, I warned of financial disaster. My insight and prophecy were not enough.

As a child, I saw the integration of my elementary school in Topeka, Kansas. I learned of my grandfather’s command of African American soldiers in the trenches of France. My family integrated lily-white Mankato, Minnesota’s public schools. Today I see President Trump betraying the Party of Lincoln with historical malpractice and racist lies.

Trump’s Republican party may deserve death but not the Party of Lincoln. President Abraham Lincoln’s party redeemed the ideals of our Declaration of Independence, which called for the equality of mankind. But 244 years of skin-color prejudice had sunk in so deeply that a century and a half after the Civil War, Trump dug up its stinking corpse to divide us once again.

As our eyes were glued to the president’s assault on democracy, the earth was burned, deforested, polluted, and coated in plastic from the depths of the ocean to our highest mountain peaks — with a mismanaged coronavirus cherry on top.

Twenty-eight years ago I sought Minnesota’s Eighth Congressional District Republican endorsement for Congress. The convention erupted in thunderous booing when my speech concluded with these words:

“Let me leave you with this bitter observation. The Republican party has become a party which revels in its criticism of welfare queens and become a party which tolerates, even worships, the Donald Trumps, Michael Milkins, Charles Keatings, and Ivan Boeskies of the world.

“We are a political party which abhors the redistribution of wealth, and yet, in the last 12 years, America’s rich have gotten richer while America’s poor have gotten poorer. There has been such disintegration of society that one American child in five lives in poverty. There are more abortions in this nation than you realize, because for many children life is an abortion. These children are homeless; neglected; ill-educated; and prone to prostitution, AIDS, crack cocaine, guns, violent deaths, joblessness, and hopelessness. These children live lives that are a prolonged bath of scalding salt.

“How can the Party of Lincoln ever hope to end abortion, or win the public’s sympathy, when it turns its back on the very children it is determined to see born?”

Harry Welty of Duluth is the Republican challenger in the Aug. 11 primary for Minnesota’s Eighth Congressional District. He and the incumbent, Rep. Pete Stauber, were invited by the News Tribune Opinion page to write columns about their candidacies. They are being published together today. The winner in the primary will advance to Election Day on Nov. 3 to face Democrat Quinn Nystrom.

HOW YOU CAN HELP:

Pick up a lawnsign from my driveway and put it in your yard. 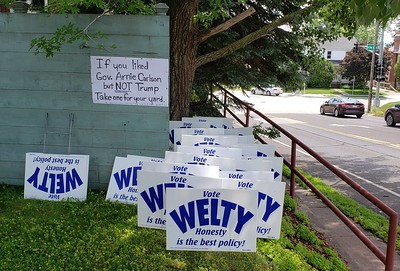 Help me spread the good word with a donation.
https://donate.fundhero.io/welty4congress