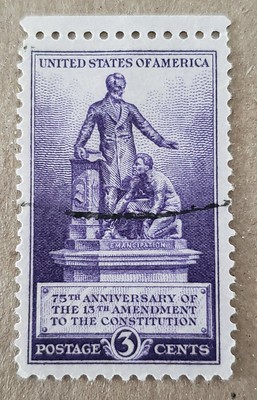 As I’ve noted before I have a French pen-pal who is teaching me French while I help S. polish up on English. S has an offspring who used to collect stamps. I mentioned that it was something I used to do and then then S. found out that the offspring wanted to start collecting them with a S.’s grandchild. I offered to send her some of my many duplicate American stamps. Offer accepted. So as I was taking them out to send I stopped at the stamp above and sent this text that I hoped would be passed on to the grandchild:

S., Send this to S. and your grandchild. I just plucked this out of a glycine envelope and recognized this as a picture of one of the many controversial statues that some protesting Americans want removed from our nation’s parks. I am only up to a hundred or so stamps and have just gotten started. I may send these on in batches as I find time to sort them. There may be 2,000 of them before I am done. If S and child get tired of putting them in a book they are welcome to ask me to please stop any time they need a break. I will get a contemporary stamp guide from our post office so that they can see the order they should be put in a stamp book.

About this particular stamp. It celebrates the freeing of the slaves by Abraham Lincoln with his Emancipation Proclamation in 1863. It is controversial now because some people think the slave looks like he is groveling in misery at Lincoln’s feet. Others say it looks like the slave is breaking away from the chains of slavery.

My favorite American stamps are the 3 cent commemoratives that were still being used when I was your grandchild’s age. They went up in price to 4 cents after I started collecting them and never stopped. Today our Post Office is being bankrupted by the Republicans who would prefer the service would be handled by private enterprise. It has always been a wonder and our first Postmaster was France’s favorite American, Benjamin Franklin.