I challenge Minnesota’s 8th District Congressman, Pete Stauber to debate the following proposition: Resolved that Donald Trump is unfit to represent the Republican Party as its candidate for President just as he is unfit to serve any longer as President of the United States.

I would accept any neutral news outlet as a host and mediator of this debate. It should be easy to arrange a time for an online Zoom style debate that will not risk spreading the corona virus. I will take a refusal to debate this proposition as an acknowledgment by Congressman Stauber that President Trump is unfit for reelection and that he doesn’t care.

I urge Mr. Stauber to accept this challenge quickly as mail-in balloting begins on Friday of this week and will continue through the August 11th Primary election.

I mailed this letter to Congressman Stauber’s Washington Office this morning and hand delivered a duplicate to his Hermantown office. A very cordial receptionist/office manager greeted me and explained that as a federal office and federal employee the Hatch act forbade her taking a part in campaign work. It occurred to me to tell her my Father, the most enthusiastic cheerleader for the Hatch Act I’ve ever known would have been been deeply gratified. Its constant violation was a significant part of the book I never managed to write back in 2006.

I was given the campaign address for Congressman Stauber and returned home to type it in at the top of the letter and took it to the campaign HQS. That was the UPS Store on Central Entrance. I both mailed it there and delivered it by hand. Pete Stauber has a million dollars in his war chest and his office is a PO Box. How’s that for a cornoa virus campaign. 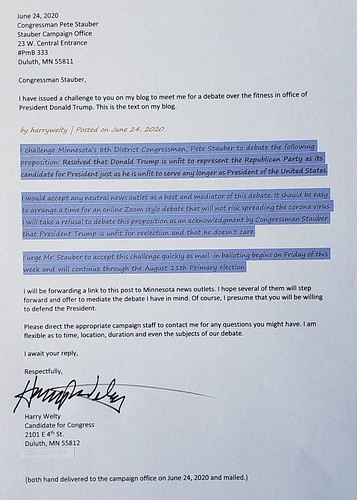 For additional information check out: welty4congress.com