A lot of interesting things as usual but I’m only going to post one item I made sure to read. Its a NYTimes story about how fast Tyrannosaurs ran. Remember the scene in Jurassic Park when the driver of a jeep was racing to escape a Tyrannosaurus and looked in his side view Mirror? 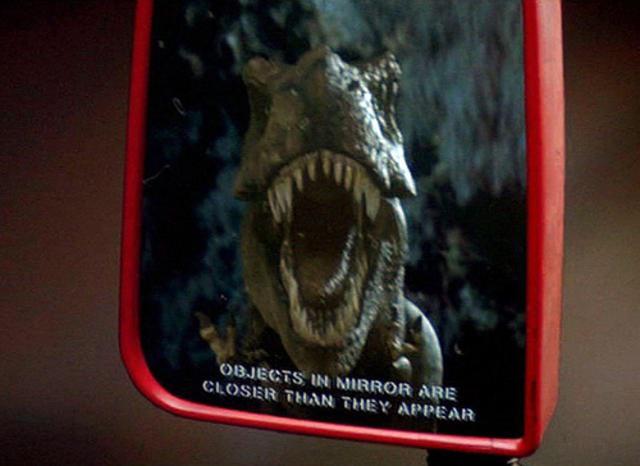 This isn’t a very impressive story. Its just one more deduction from millions that paleontologists have made to give us a clearer picture of an apex predator that died out 65 million years ago. However one of the delights of the NYT is that its online stories are followed by a string of other related stories. If you like dinosaurs or the other subjects covered its fun to leaf through them.

I have been a science buff since we were agonizing over THE “missing link” when I was a kid in the fifties. Since then dozens of links have been found not that the willfully blind have noticed. Today half of America believes a snake oil salesman for the sake of politics than the millions of scientists who have drawn conclusions based on research. Which reminded me of a post I wrote. I just popped the search terms dinosaurs, Limbaugh, locksmith, moon into my blog’s search engine and found it. I’ll remove the very tedious middle and cut-to-the-chase.

STUFF HAPPENS AND THEN YOU DIE AND MOON DUST
AUGUST 16, 2013 HARRYWELTY

Other than substituting a saltier four letter word with the soft gauzy nothing “Stuff” there is truth to this unexceptional saying. (Moon dust will show up later in this post)

I lead today’s posts with this saying because I have half a dozen things – “stuff” – to do today, most of no great consequence. I know that sounds fatalistic but I am hardly a fatalist. Had I been I would not have run for political office 15 times. Neither would I have helped lead the charge against a dim witted school building boondoggle. I know that in four billion or so years our sun will wink out and I know that that leaves Earth 16 future stretches of a quarter billion years (about the length of time that dinosaurs “ruled” the planet) …

If you presume that extinction is immediate, as Christian fundamentalists do, then the Earth still has roughly 400 times five-million-year stretches left (5 million being the length of time modernish humans have existed) before our planet’s demise – Praise the Lord!

I began by writing about the future of the Earth and that reminds me of a conversation I had with a Christian fundamentalist twenty years ago.

I had sculpted three huge dinosaurs in my yard out of snow the year before I called a locksmith to replace the locks on my home’s doors. The dinosaurs were on his mind. As I recall he was of the opinion that humans had walked on Earth with them owing to his notions about the Bible’s timeline. I said something about science and he gave me his take on the folly of scientists.

Apparently before the moon launches of the 1960’s he had taken to heart the wild speculations of some scientists about what we would find on the moon. Some had theorized that the moon would be covered by hundreds and thousands of feet of dust that had accumulated there over millions of years in the absence of an atmosphere. He told me that when Neil Armstrong and company landed on the hard surface of the Moon he realized how fallible scientists were and no longer paid them much attention.

Sounds like today’s Republican Party. I’ve visited his shop many times through the years and he always has Rush Limbaugh on the Radio.

As I said I’m not a fatalist. Life is sweet, or can be. Finding a purpose in life, or making one, makes life just that much sweeter. I’ll die long before humankind winks out and my fate is not much more important in the long run than the red ants I ran over backing out of the garage yesterday as they came scurrying back to their nest with smaller captured black ants in their mandibles which they were going to enslave.

For myself I’ve determined that to make my life sweeter I must do my best to make a sweet life possible for my children and grandchildren and what I hope will be a long succession of my descendants who are quite likely to evolve way past today’s version of humanity as they travel on to every corner of our galaxy.

But, before that happens I have many days ahead of me to make up lists of stuff for me to do. If I’m lucky and live to be one hundred that will give me another 14,400 days. Getting the Duluth School district out of debt is on that list. Only the voters can spare me messing around with that task by handing the chore to some other candidate. Its their choice and as long as they can exercise their right to cast that vote I won’t need to riot in the streets.