You Have My Sympathy Ilhan

Prologue:
Ilhan Omar, Minnesota’s new Islamic Congresswoman, has offered her “unequivocal” apology for twitting the fiercely pro-Israel Political Action Committee AIPAC in a tweet. Some of her fellow Congressmen are not satisfied. Full abasement is called for and perhaps Congressional censure. Nevermind that traditional Republican condemnation of “Hollywood” for unraveling our moral fabric echoes similar calls from earlier politicians that paired amoral Hollywood with the slur “Jew controlled.”

Three years ago, I submitted the following column after accompanying a peace studies class to the Holy land. I suggested that it be the first of several to follow covering my two-week tour of Israel and Palestine. I’d grouse about how the reputedly corrupt Prime Minister Netanyahu insulted President Obama. I’d gasp about the belligerent drunk who hectored my liberal Jewish
guides. I’d describe how I wept at Yad Vashem as an archival movie showed two small shivering brothers sitting on curb in Warsaw, the little one listless and near death; both boys the age and image of my grandsons. The Reader didn’t get back to me back then so I resubmit the column today to register my own impatience with the one-sided debate allowed in today’s America over an issue almost as important as guns, gays and gynecology. 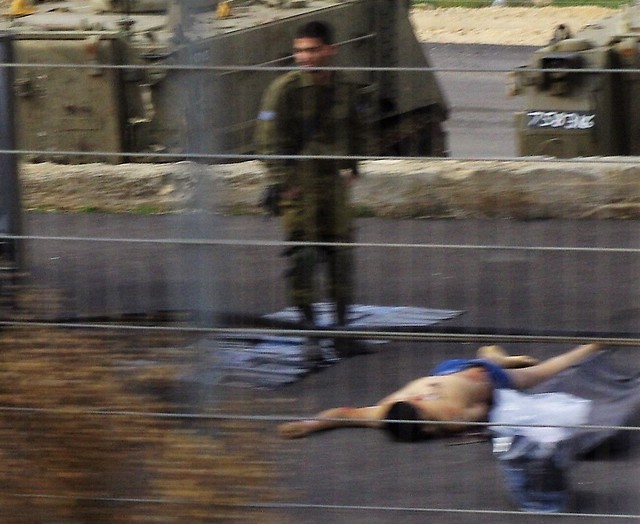 Most everyone could benefit from a spiritual journey even an agnostic like me. So, when Claudia asked me last summer if I’d like to travel with her Seminary to study Israeli peace-making efforts it only took me a day to agree. Our departure in January would necessitate my absence from the organizational meeting of the Duluth School Board. That would leave me with no say in the new leadership of a Board which had censured me the previous Christmas. It took 24 hours for the quest for peace to take precedence over the quest for influence. I would tell my friends that if I could find peace in the most contested landscape on Earth I’d bring some of it back with me.

Friends shared their fears with me before I left. Piffle. Everywhere I passed I found squads of Israeli soldiers with Uzis at their side or slung over their backs. Some of the pony-tailed warriors packing heat looked like the girls I dated in high school except that they wore khaki’s and berets instead of strapless gowns.

My trip was bookended by two remarkable coincidences. They are a fitting introduction to the installments I mean to share in coming weeks.

On our second night in Israel, outside the walls of Old Jerusalem, Claudia and I had a free night to dine by ourselves. We chose the posh Rooftop restaurant atop the Mamilla Hotel. Our DK guide gave it three dollar signs

We had just returned from a Shabbat service at an orthodox synagogue. The stunning views of Jerusalem in the open terrace had to be viewed through a saran wrap shield that protected us from Israel’s winter chill. We were seated by a voluble American who made stinging comments about the naivety of peace advocates like those we had traveled with to Israel.

A sommelier brought us an excellent Israeli cabernet as two more tables were seated. The first was a party of four who took a long table with empty chairs for late arrivals. They were followed by a young couple who were shown to a table by our side. The pair held hands across the table and gazed dreamily into each other’s eyes.

As we finished our meal an approaching hubbub caught my attention. I calmly told Claudia that the Prime Minister of Israel was headed our way. Claudia told me she didn’t know what he looked like but I recognized him. I’ve been paying close attention to Bibi Netanyahu since the days of the first President Bush. The young man seated next to us turned toward us and explained, “I didn’t vote for him.” His girl friend’s eyes pled with him to please shut up as a guard with a holstered gun under his North Face jacket stood with his back towards the disgruntled voter’s chair. Another guard took position on the far side of the table with the extra chairs. The Prime Minister and his wife had finally arrived. More security fanned out onto the balcony just outside our saran wrap cocoon. I had purchased an identical North Face jacket the night before we flew to Tel Aviv. All I needed was a gun on my hip to join the security detail.

The peace skeptics at the first table scurried over to coo appreciatively for the Prime Minister. They recorded the unexpected meeting with their cell phones. As I reached for mine, Claudia ordered me to stop.

Once seated, Netanyahu engaged in a lively soliloquy his deep bass voice rolling under our table. When I turned around to sneak a peek he had both hands raised above his head much as mine were raised on the front page of the Duluth News Tribune two Decembers ago.

To say that Netanyahu is despised by peace types is putting it mildly. That didn’t stop me from basking in the presence of power. I ordered coffee and desert to linger a little longer. And yet, over the next day I stewed about our close proximity. Claudia had shown me a galling story about Bibi in the Jerusalem Post before we saw him in the flesh. The story had stuck in my craw. The next day I wrote a pointed letter to the Post. It wasn’t published.

Two weeks later, after our return to Duluth, the other bookend jumped out of my computer when I reviewed the thousands of pictures I had taken while in Israel. I’d shot one of them midway through our trip on a drive to the divided city of Hebron.

We had just left a Palestinian family in whose home we had stayed while near Bethlehem. They lived in Beit Sahour where the angels had directed shepherds to visit the manger. We pilgrims had enjoyed an energetic conversation at their breakfast table about war and peace before leaving. The family’s daughter brought it to a close by mentioning that “someone is shot every day.” That may have prompted me to take more pictures than usual of military checkpoints as we drove to the city where Abraham, Isaac and Jacob, lay buried under the Ibrahimi Mosque. Like Hebron the Mosque is divided into a Jewish and non Jewish half. No Jews have been admitted to the Muslim side since 1994. That was when an American Jew shot 29 worshipers dead while wounding another 125.

On one side of Hebron live ardent Jewish nationalists. They move into any home left vacant by Palestinians down on their luck on the Palestinian side of the city. Above the souk, or shopping district, wire mesh was strung to catch the garbage poured down on shoppers by Jewish squatters. To discourage mayhem IDF forces command Palestinian rooftops.

We were all delighted by our Palestinian guide. We were to learn near the end of our trip that one of his legs was shorter from an Israeli soldier’s bullet. He was full of mirth and good advice. He encouraged us not to buy goods from the many vendors who pursued us through every shopping district. But on this walk through Hebron, he had only nice things to say about one such vendor. “He’s a good guy.” He told us. We found out later that the good guy, like our guide, had survived a gunshot during a protest.

At one of the last stalls we passed in the souk a merchant told our group resignedly that another Palestinian had been shot dead that day. We walked soberly under a canopy of trash back to our bus.

What we did not know, and what I would not learn until reviewing a fuzzy picture after my return to Duluth, was that our little band of peacemakers had driven right by that day’s killing. Our bus driver had pulled into a road guarded by Israeli soldiers to turn around. As we paused I snapped a hasty picture of IDF trucks parked by razor wire. In the photo’s lower right corner lay a dead man at the feet of an Israeli soldier. The body was stripped naked and sported angry red welts.

Harry Welty is a local eccentric and perennial candidate for office in Duluth who also pontificates on his blog: www.lincolndemocrat.com.