I listened to the NPR story about Minnesota’s Dorr brothers who make millions by lying through their teeth to piss off pro-lifers and second amendment fans to gin up donations to their phony baloney charities. Lies have always helped people make money. Its probably why my Mother didn’t want me to go into politics and why my Dad, once an insurance investigator for the state of Kansas, didn’t want me to go into insurance sales. Its how Donald Trump has made millions defrauding students at his universities and contractors building his empire. Its how the NRA and a great many groups affiliated with a great many Republican affiliates make money and its how the Koch Brothers stay in a too little regulated industry polluting the hell out of the Earth and lastly its how the Murdoch klan keep increasingly paranoid viewers watching their half ass media new programming.

These people have been fine tuning the majority of Americans out of politics and elections for the last twenty years. As Andrew Jackson has been hailed for helping get poor white men the right to vote the new Andrew Jackson…..Donald Trump, is counting on the GOP to make sure poor non white people don’t exercise their voting franchise. If you want to read up on the Dorrs just google: “dorr brothers money making”

Meanwhile, I spend my time trying to figure out what’s going on. I have not been surprised by the Corona virus epidemic because I have continued reading about this and other threats to our species for years. I’m about twenty pages away from finishing my third book on plagues. I’m not talking fiction like Andromeda Strain or Hot Zone or the dozen others being recommended to get us in the mood for corona virus. For the most part I read non-fiction. 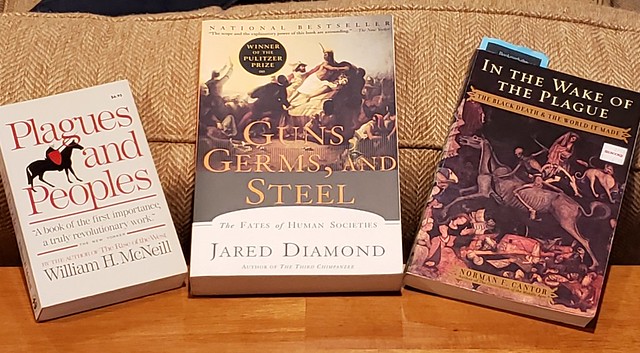 I keep track of the books I read from beginning to end. You will find that list here stopped at the year 2017 when I lost my ability to update my old pages. I read the book on the lef in 1988 and the book in the center in the year 2000. The Cantor book on the right “In the wake of the plague” is my current read. So, it seems, I read a book on this topic about every twenty years. I’ve kept up with the growing knowledge of plagues and how they have impacted mankind. Let me just say I have no use for liars who are telling us that more people will die if we aren’t willing to turn our nursing homes into killing fields. How dare these jackasses call themselves “pro-life.” Bullshit! I am still too busy to fill out this post on that subject but I still plan to get to it. I’ll let my eight loyal readers know when its ready.

Unlike Pete Stauber, and most other congressman, I don’t spend half my waking hours calling rich people to ask for campaign finances. I spend hours each day reading and studying the news, history and science. Those are three things I wouldn’t trust most Republican Congressman to know anything about let alone our ignoramus of a President.