I love my blog’s search function. It always surprises me what it can reveal in and about my ten years of blogging. Apparently, not counting this post I have mentioned “paranoia” in 47 previous posts. Its easy to count as the search function shows me 20 posts per page and there were three pages with 20 + 20 + 7 such posts. A couple even had the word “Paranoia” in the Title. Now that’s a small fraction of my total 19442 posts (not counting this one). I think that shows some restraint on my part as it means I’ve only mentioned it in .0049724926 percent of my total posts. (You gotta love calculators)

It’s on my mind now despite living a pretty mundane life. Last night my very interesting evening with the School Board (beginning with our hush hush closed meeting to discuss……….) Shhhhhh!

As I was saying – after my night of school board meetings I had eight minutes to drive up to my heart-dappled Glen Avon Presbyterian Church to practice with our choir. This will be difficult for me to continue thru June because Claudia is now working Wednesday evenings helping register homeless folks in at CHUM. Until June I’ll be skipping choir practice to take care of our grandsons. I’m looking forward to these evenings but since I can’t really read music I’ll be missing my only chance to practice our music by ear. I don’t mind looking foolish at a School Board meeting (that’s a lie) but I hate the thought of coughing out an unplanned solo or hitting a false note in church.

Ah, but a sick grandchild and my rare Wednesday board meeting left me free for the night and I hurriedly parked on the south side of Lewis street as I have for twenty years. Thank goodness I got the music. It is tricky and syncopated. When I left the practice feeling relieved I opened my car door and saw a parking ticket fall to the street. Twenty-four bucks! I guess I should thank my lucky stars I got away with that for the past two decades. It was bound to catch up with me sometime.

So this morning I awoke in our guest room bed alone. I moved there after waking up and fretting for a couple hours that would have been better spent sleeping. I have all day to fret. Last night however, I decided the deep well that I have put in my mattress may explain the sore shoulder muscles I’ve endured for the past week after shoveling snow. If so, maybe its not simply the Americapocolypse that has me up at nights. I’m going to lobby for a new mattress.

Claudia, it turns out, had to leave early for her Twin Cities Seminary classes this morning. She left me a pot of coffee and two sleeping cats which she had fed. Nice. Then, I read the 25th day straight of unsettling news about our new Command-her and Chief. Then, I thought about the likely imminent departure of our Superintendent. Then, I thought about how unless we can find alternative funding the School District may have to pull money out of the classroom to pay for replacement of tire mulch. Then, I thought about how to lobby the Minnesota Dept of Education to take money out of our Capital funds instead. Then, I saw my parking ticket on the dining room table. Phooey!

The ticket explained that I could pay easily over the phone and easy sounded, well, easy. But when a cheery voice announced I could do it easily for an extra $3 charge for phone processing I hung up and wrote a check instead. I’ll pay 54 cents for Post Office processing instead, thank you very much.

And behind all this personal minutiae lies a fearful political collapse of the Republic. The press won’t cut Trump any slack as he blunders his way proving that he can make the national political transition of government as chaotic as last year’s election. He has read his political mandate about as well as he can read. The saving grace is that in a pinch the Republican’s in Congress will likely not give him authoritarian powers lest he do to the Republicans what Kim Jong-un did to his half brother a couple days ago. They still need a powerful enough justification to impeach Trump so as to shield themselves from their fire-breathing Limbaugh and Rapture-ridden Christian base. 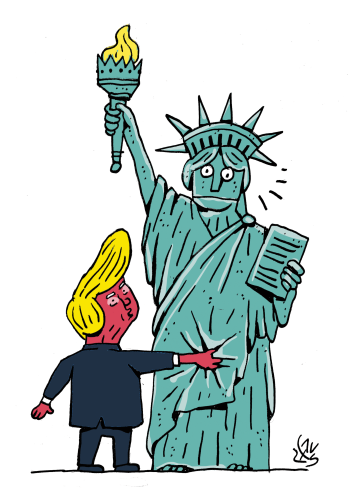 I take little comfort when I read an old testament Christian’s explanation that God chose lots of evil men to work his will in Old Testament times and that’s why they voted for Trump. Trump is our Nebuchadnezzar. An illiterate, pussy grabber is God’s judgement on America. Maybe that explains Trumps stunning retreat from his last thank you to the RNC convention for cutting Gays some slack. Then he backed off and threw a bone to the fundamentalists scrapping the Johnson Amendment.

I’ve often joked that “Just because you’re paranoid doesn’t mean someone isn’t out to get you.” Looking at my Facebook feed which keeps growing exponentially as I add new friends I see how the folks on my side of the political divide are rallying. I only get short glimpses of the pro-Trump side as they typically eschew the Fake News I rely on. They probably feel paranoid about my jokes about the impeachment of Trump. That may be cause for alarm. At choir practice last night a friend told me of a retired school superintendent he knows (and that I know too) who is out buying all the ammunition he can.

I really need a good mattress.