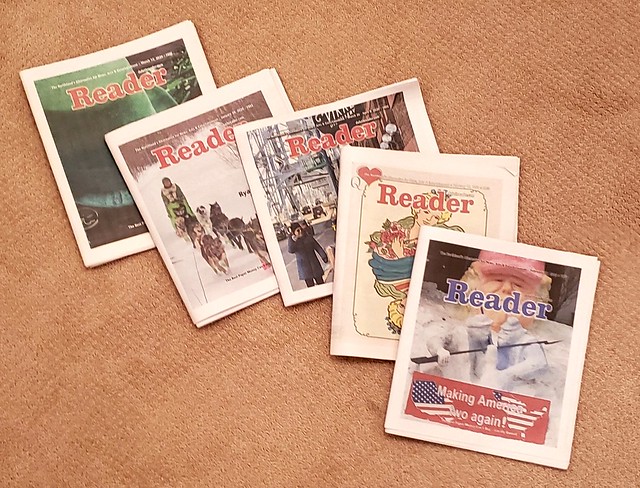 I’ve got a plea for those of you who don’t like our entire news business in Duluth being run by the Trump-loving, Forum Communications. I know the Duluth Reader hardly counts as a full fledged newspaper but it does offer a different take than the Trib which now charges people to publish political letters-to-the-editor.

You may have noticed that the Reader has missed two issues in recent weeks for the first time in twenty years of publishing. Its been bad luck on bad luck. Coincident with the Coronavirus closing half the places that readers can pick it up and the loss of about 90% of its ad revenue, its former printer was just sold and dropped the Reader.

Publisher Bob Boone is nothing if not a resourceful man keeping his baby alive all these years. But even this has been a bitter pill. He got married late and suddenly has a wife and son to provide for. I called Bob up last night and asked him about his challenges. Before the corona-virus blindsided everyone he persuaded his banking lenders to help him along with the new love of his life. Bob loved the old Superior Movie theater he work as a kid and when the City of Superior tore it down he fixed his sights on Duluth’s West Theater on Central Avenue. He’d finally started making a little money and was eager to put a new attraction in a revitalizing Western Duluth. It opened full up attractions but, Poof, Gone with the Virus.

I have a vested interest in the Reader. Bob Boone is the first person ever to publish something I’d written. Monkeyworms. I was once offered a little money to write for the Budgeteer the advertiser that the DNT acquired. I was flattered but I figured I owed it to the Reader to keep submitting columns. I didn’t need the money and I get a kick out of the Readers scrappy independence.

Its been a bad couple decades for America’s once lively press. Facebook recently dedicated $100 million dollars to help prop up local newsrooms which have been threatened with extinction in recent years. If I was in the Congress I’d author a bill to help subsidize local print news across America to prevent the entire industry from being taken over by advertisers and politicians. I have always liked the maxim that the news is the first draft of history. You should go to the Minnesota History Center in St. Paul and look at its room full of Minnesota newspapers on microfilm. I did a lot of research there once for a book that I never got around to writing. There is a record of most American small towns going back generations in microfilmed papers. Who’s going to keep track of the history in the future?

I’m worried about the loss of the Reader’s voice in Duluth. I’ve never been paid a cent to write and I blog anyway but I can’t help myself. I’d miss the Reader if it stopped coming out every week. I don’t know how Bob Boone is going to save himself but I encourage everyone who is saving money by sitting at home to chip in to help tide Bob and his staff (of one at the moment) over until Bob can rise from the near dead. He’s aiming on publishing every other week until the storm blows away. Send the Reader a check at this address: Duluth Reader, PO Box 16122, Duluth, MN 55816 If your an old fart like me you remember how to address a letter. If you are young its about time you figured out how we old codgers used the first postmaster general’s, Ben Franklin’s, baby. If you can Consider sending a Benjamin or two. In honor of Poor Richard…..and the Reader.