Discretion is the better part of valor…..or so it is said. Intelligent television can provoke deep thoughts. The other night I watched a one-episode drama on PBS called The Windemere Children. It was a drama about the thousand Jewish children left feral in Concentration camps and brought to England to recover, 300 or so were brought to the idyllic lake Windemere to an old wartime factory barracks that some of the children thought was simply another camp to exterminate them.

Its not uncommon with such remembrances of the war and its aftermath to have a few elderly survivors stand in memorium before the credits roll. Five of the old men portrayed as boys stood above the camp and recalled this modest effort by the Brits to save some of the Holocaust’s youngest victims.

Then last night we watched the fourth episode of The Plot Against America. Its mood of dread and menace is perfectly captured in a musical passage from Gershwin’s Rhapsody in Blue that follows each episode. 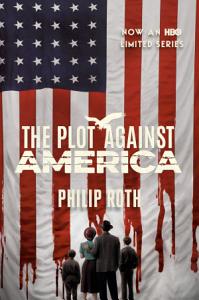 the series is taken from one of novelist, Philip Roth’s, last books. I rarely read fiction but I read read book reviews and I read a review of this novel when it came out twenty years ago. Its an imagining of what could have happened had a Republican President defeated FDR in 1940 while running on a then very popular peace plank. In this telling that candidate was America’s sweetheart Charles Lindbergh. The story imagines him making peace with Adolph Hitler and abandoning England and the Jews of Europe to their fate.

Twenty years ago I considered this just a little too fantastic because the Germany admiring but shy Charles Lindbergh seemed an unlikely candidate for Presidency. The Republican who did run in 1940 was my Dad’s industrialist hero, Wendell Wilkie. Much to the chagrin of lots of Republicans Wilkie didn’t condemn FDR’s socialism nearly enough and worse yet, after he lost he joined FDR to support a vigorous effort to prepare for a possible war. My parents and grandparents generations spanned those war years and I have to say the muted sepia-tinged world of pre-war America seems especially well crafted. Its damn good drama and the world its portrays of prejudice closing in on American Jews doesn’t seem so unreal in this “What if” history.

If I was Jewish I’d take scant comfort in Donald Trump’s unquestioning support of Israel no matter how much it tramples on the Palestinians. He has also averted his gaze from his triumphant Alt-Right supporters who are increasingly wedded to the European the proto-fascists who are the likely source of that paranoid video I shared in a previous post.