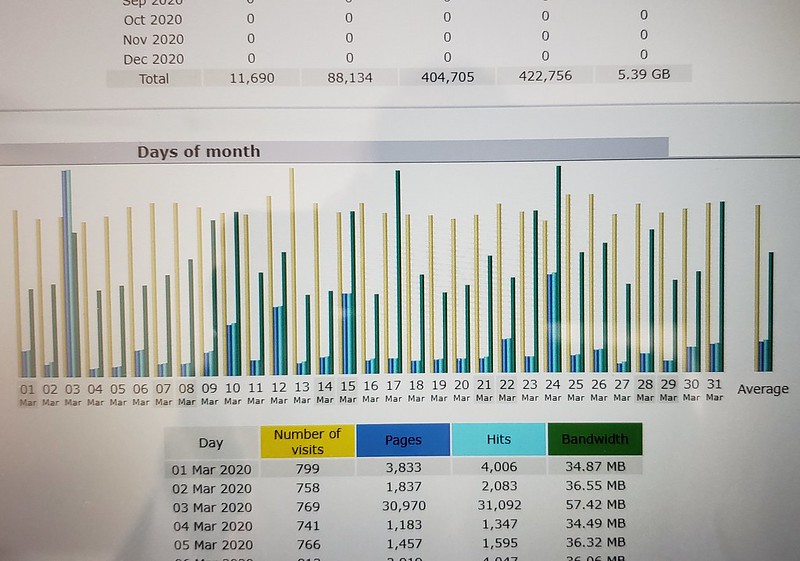 Its two months before I (may) file for Congress. I guess April Fools is as good a day as any to organize oneself. So, this is an invitation to join the anonymous “green democrat” who wished me well yesterday. Above you can see what I have checked daily over the past dozen years of blogging. My visitors are modest not legion. My loyal 8 comes close to averaging 800 visitors a day in some months. Over the last 12 years I have no idea how many people have paid a call on my ten or twenty millions of words.

I sent in a new column to the Reader yesterday. With only two months of them before I go on hiatus I’m thinking of making them a weekly event. I have two new ideas for future weeks. Yesterday’s submission was “The Gift of Why.” It is not overtly political. In fact, I warned publisher Boone that I didn’t want to write a lot of political stuff when he first invited me to contribute. He was hoping I’d represent the Republican side of politics to give his tabloid a non-partisan feel. At the time in 2001 I was still a nominal but apostate Republican who had at least one or two more campaigns in me as a moderate Republican. I guess they were part vanishing acts. In 2006 I contemplated becoming a Democrat hence the name of this blog. Instead I filed for Congress as an Independent candidate again as I had in 1992. But after a short-lived fling with Democrats highlighted by the delightful victory of Barack Obama I retreated to my sullen non partisanship with occasional threats to upset the Republican apple cart. I would do so by returning to the fold as an unreconstructed Re-constructionist. That’s a reference to 1876 in case you’re scratching your heads.

I got a call from Dr. Timothy Westcott of Park College in Parkville, Missouri an hour ago. I had sent him an email mentioning that I suspected my Grandfather suffered from the Spanish flu when he was in France. The plague was more likely the American flu as most researchers think it began a few miles from my Grandfather’s home town of Salina, Kansas. It first hit Fort Funston, a training camp for Americans headed of to the trenches of WW I. The most iconic image of sick soldiers comes from Funston and its where, after the war, my Grandfather was brought for treatment and rehabilitation of the wounds he suffered in the war.

Dr. Westcott mentioned this to a small gathering of academics who have been planning a June commemoration and they immediately asked him if my Grandfather had been at the opening of the Tomb of World War I’s Unknown Soldier.

Their college has led the charge to posthumously highlight the deeds of minority soldiers in our previous wars. They had learned that a native american soldier was one of the pallbearers at the tomb of the Unknown in the 1920’s and wondered if George Robb had been present. I told him I’d check my records. Of course, I’m also planning on completing two books, running for congress and other miscellaneous activities. Its time I dug down deeper to prepare for all these activities.

If there are any other people willing to move past anonymous well wishing to help me put together a web campaign for our age of Coronavirus I’d be pleased. Again my email is harrywelty@charter.net. Send me an email and introduce yourself. I’m likely to post replies I might have to you for any of your questions here on the blog.

I consider myself a “militant moderate.” I also consider myself uniquely suited to the upside-down politics of today. Although they drive me nuts I like almost all of today’s stereotypical Republicans and Bernie Supporters. I do not dislike Pete Stauber. In my view he is simply an enabler of today’s dysfunctional politics. That makes him a coward in my eyes. I can’t say that I’m all that brave myself. I bit my tongue a thousand times so I didn’t have to worry my better half about causing her to be fired. And like most politicians I didn’t want to alienate voters unnecessarily. Today I’m sixty-nine years old and speaking my mind is hardly brave at this point in my life. But I have a record of public candor that has made me personal-non-gratta to the Editorial Board of our local paper. I didn’t bite my tongue often enough when they had their heads in the sand.

Now their heads are in the sand over the closest thing America has ever had to a wannabe dictator and compared to his asinine attacks on the press I’m practically a saint. The DNT editors dismissing of me makes my chest swell with pride. But if you review my posts about the DNT stretching back to the beginning of the blog I think you will find far more generosity of spirit towards our newspaper than vinegar. Just type “DNT Editors” in the blog’s search function.

A spirit of generosity toward all is what I intend to bring to what is likely to be a short-lived campaign. I will ask democrats to vote for me as well as disappointed Republicans and Independents. We have an open primary in Minnesota and Democrats could upend a Republican primary by helping me defeat Pete Stauber in it. Then they could sit back and decide in November whether they wanted me as a bridge builder or whoever the Democrats choose in the primary. If there is no democratic primary contest a vote for Harry Welty or Pete Stauber would be tacticly smart for the same reason that Trump begged democrats to vote for Bernie Sanders. And if I get the Republican primary victory there would be no danger of electing a Trumplican to Congress from Minnesota. That would give me two months to make a case for myself.

So, there you are. One more reason to help an infamously eccentric politician. And haven’t you been disappointed time and again by all the non-eccentrics politicians? Maybe this is my time.