Rather than separate posts I’ll just make quick comments on several of the stories in today’s Trib.

I made the front page headlines and Roger Reinert only made the back pages. My name was singled out along with four other semi-controversial names as candidates who have filed. The others were Tim Little a city councilor who lost a pissing contest with the Trib, Jay Cole a wheeler dealer with no cards and Carinda Horton who the Chamber probably got fired from her KDAL talk show program when she got too vocal in criticizing the Red Plan on air. (Carinda’s husband, Tim, likes to get into public rows too outside the boxing ring where he is better equipped to throw punches)

The message I get from this is that those of us not properly anointed as serious by the Trib will have a little bigger credibility hill to climb. Trib reporter, John Myers mentioned (quite rightly) the fact that I’ve run for office many times before. Ah, but then there’s the counter balancing effect of experience.

Roger was sort of mentioned on the front page. At the top of the front page there was a little graphic of a train with little boxcars filled with passengers. One lonely little boxcar, however, stood empty. You have to go to page A9 to discover that it should have been occupied by Roger Reinert. 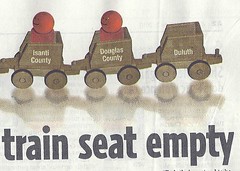 Roger has only lost one race for public office. I’ve lost quite a few more than that. (I hope you don’t mind my being coy and not announcing the number) On the other hand I think we have both won two elections. That evens things up a bit. I’ll take today’s paper as giving me a slight edge in day two of our contest.

The County Board approved a half million sale of tax forfeit land to the School District to build the new Wheeler Middle School. Some voices are calling for the District to save the $45 million on the school and simply keep New Central as the middle school.

This reminds me of something a Faribault Chamber official told me in defense of Dixon’s days in that city. She told me that she thought Dixon was a visionary. When asked for an example she noted his call for a community based school where a school house many community services. He never got such a thing built in Faribault and ironically with his coming of Dixon Lincoln Park which beautifully served that niche was all but shut down. All the services left including the Boys and Girls Club which moved to the dicey Clyde Iron site which is still skating on financially thin ice. I don’t recall Dixon touting such visionary things in Duluth. Maybe he will have to leave before we can get our sight back.

Some of the blindness was the School Board’s. As Loren Martel discovered, and many of us suspected, Dr. Dixon has been feeding his school board members only the positive letters from the public. Two and three years ago this gave the Board members the false impression of great public support for a referendum-free Red Plan. Loren has also been dismissed as a constant letter writer by the Trib much as I have been pegged as a “perennial candidate.” Its nice to know what the Trib thinks of people who waste their time expressing unappreciated views on the editorial page. The Trib is no doubt a member in good standing of the Duluth Chamber of Commerce part of the cabal got Carinda kicked off KDAL. Dr. Dixon’s kind of people. Out of sight out of mind.