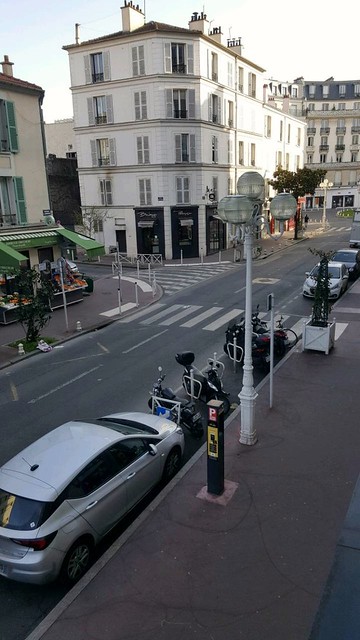 A street in Paris under lock down.

My French pen pal Etienne sent me this today. No traffic on the streets of Paris. I sent him a picture of four cars on 21st Avenue East with the explanation that in our small town there seemed to be a lot more traffic than in his world capital city.

My wife has a nephew in the ICU suffering from Corona-virus in Bismarck, ND. Everyone in my family is taking this pandemic seriously. I and most of my family have the good fortune to be able to ride it out with some security. Not so those people serving us when we saunter out to spread viruses we may have but can’t be sure we are spreading.

I have been assuming worst case scenarios. Until the beginning of the week I thought that was unlikely. Now I hope the concentration of scientists, the medical comunity and America’s “deep state” keep us safe from Donald “I’d give myself an A” Trump.

I went to high school with a ton of kids who would be considered the deep state by the loons like Limbaugh and Hannity. They went into public service like the generation of young people went into the Peace Corps. Deep State. That’s an insult……to my intelligence.

But I’m having fun. As I said before I have a few objectives during the plague. Maybe run for Congress again with Pete Stauber’s Trumplicans handcuffed to their divans in front of Fox News. Learn French. Write a book possibly in tandem with a campaign for Congress. And most fun live up to my failed promise to substitute teach. I had decided to simply teach in the school that my grandson’s attend. But they don’t attend it under the circumstances and I’m beginning to see that this could be the end of the school year.

So why not tempt them into doing what I’ve done all my life – peek under the hood of “What’s that all about?”

I drew this silhouette on a grocery bag today and delivered to my grandson’s porch. For the fifth day in a row I’ve been taking them conundrums which require some sleuthing to answer. Yesterday it was figuring out which stamps had been purloined by a sticky fingered friend but stuffed carelessly into a heap of stamps. It involved taking my old stamp book and supplies to them with instructions.

Today Sherlock (that’s me) has taken them the following puzzlement which will require them to do some googling and page through the indexes of a dozen ancient Reader’s Digests that a friend gave me two years ago. My grandsons are Baker Street Boys Number 1 and Number 2. When I dropped this by their mother told me that they would be giving me cunundrums to solve myself. Not a bad way to spend a quarantine. Here’s is today’s instructions

As 221 Baker Street is becoming something of a retirement home for the infirm, we must husband our meagre savings prudently. Therefore, the significant reward you find today will likely be the last of its kind. The good Doctor and I must guard against our natural inclination towards charity.
Number 2, I am remiss. You succeeded in translating the charming French mots for “very good.” I wonder if you still remember the phrase? I promised you a wee bit of a reward for doing this so. In this envelope you will find five two-bit coins. The extra one is yours.

Today’s challenge begins with a short detour to discover the name of a city that once hosted more millionaires than any other city in the nation. You will find it located not only on a map but in a song lyric. Google the song Cincinnati Dancing Pig. In the lyrics you will find a city close to your heart. Once you have found this city you must search for a story about it in the set of old magazines, I have left for you. Somewhere in this set of magazines you will find a story about said city – again not Cincinnatti. When you find it, read it and you will learn not about millionaires but of another of this city’s famous residents. This one became so famous for paying a call on a popular hotel that he became a permanent resident and the hotel named its restaurant after him. (A fact not mentioned in the story)

Here is a hint. He has four legs and no, he is not a pig! When he left forty years ago he took up residence elsewhere in Duluth. You could even visit him today if only you knew where to find him. Your challenge is to discover who and what this visitor is and find where he resides today. Google will also help you in this search.

AND YES, the impoverished residents of this retirement home will raid the coffee can to find a small reward for your labors in this challenge.