. . . And why it would be a damned shame if I am not reelected to the Duluth School Board this year.

Here’s a visual metaphor to explain my reasoning taken from a mural I painted in our church’s children’s rooms twenty years ago: 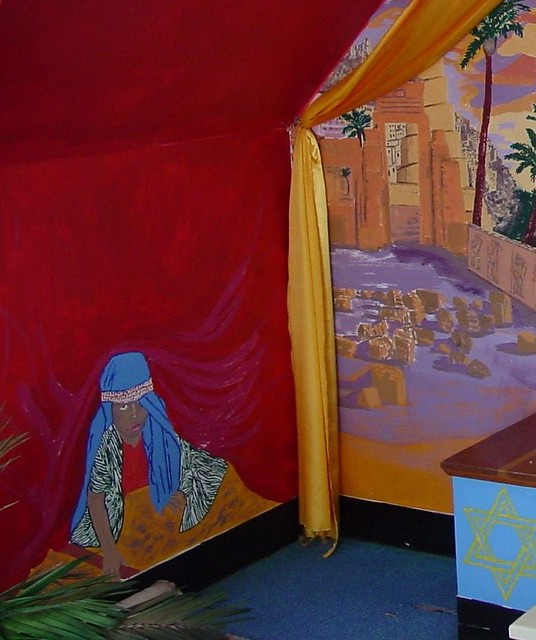 This is a picture of a small boy sneaking his head under the Red Tent. Twenty years ago the novel The Red Tent was so popular that church women across America began decorating Sunday School Rooms to look like the Red Tent. Because of my snow sculpting people in Glen Avon assumed that I could paint too. Well, I could use an over head projector. I could paint within lines – coloring book fashion. And I can improvise. When asked to paint a scene of a desert on the wall of a room painted red like the book’s tent in the Era of Jacob, who wrestled with the Angel, I gave it my best. (You can see the full mural and others on this page of my old website Snowbizz.com.)

Not having read the book there is, to my knowledge, no child peeking into the tent but I thought putting one on the wall doing just this, seemed appropriate for a Sunday School classroom. I borrowed a Sunday School student wearing a shepherd’s costume from our Christmas pageant.

As for the metaphor – that could me me peaking into the sacred precincts of our Schools or Government or the News Business just like I do when I pick up a history book. And I read lots of them. But unlike that little kid looking into the Red Tent I’m 66 years old and I have taught myself to write and report and look at big mysteries critically for most of my adult life. Few people in Duluth have the breadth of knowledge and experience I have when it comes to the Duluth Schools. Furthermore, I don’t keep it all to myself. To many people’s chagrin I share much of it with the public. As this election season goes on I will be sharing more.

But I’m an acquired taste. Not everyone likes my peeking into the tent or under rugs especially the folks who have swept disagreeable things under the rug to keep them out of sight. But peeking under the rug is called “transparency” and everyone says (officially) that its all the rage except for our President who calls it “fake news.”

I have been pretty subdued in the blog this summer. I’ve had other things to do – organize a school board campaign, visit China, garden, walk door-to-door. But the actual General Election is seven weeks away and my readership has doubled recently. Its time for all the blogging I’ve postponed to kick into a higher gear. There is so much to share.

I truly believe my being on the school board is absolutely vital to moving our schools into the future that the Red Planners promised Duluth. But the Trib, in looking for some magic solution, once again endorsed neophytes (newbies). I must say that the neophyte they endorsed over me as a “fresh face” in 2007 helped make the School Board distrusted while remaining completely ignorant of our downward spiraling finances for her entire eight years on the Board. Likewise, they endorsed a young thing, elected with me in 2013, who’s lone witnessing of an alleged assault (even the so called victim denied it) plunged the School Board into two years of farce. And now, once again, the Trib is trusting neophytes in the hope that their ignorance will give us bliss.

Mine isn’t a blanket condemnation. While looking for their editorial endorsements I stumbled into their videos of the school board candidates in the first few minutes of the Trib interview. I recommend looking at them. I was pleased with mine.

As for me sneaking under the tent, Well, my tent sneaking evidently caused a ruckus at the Trib leading to the replacement of one of the Editorial Board members. I’ll explain my theory in the next post as I ramp up my coverage of the School Board and campaign to rescue the District from a status quo of “Ask no questions.”