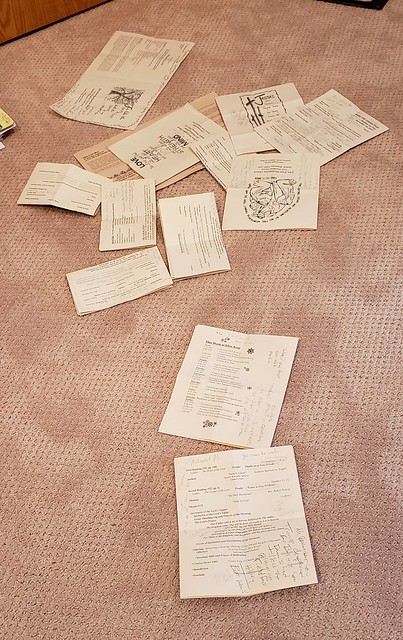 Once again I came home with my Church bulletin cluttered with my notes from today’s message. This is but a remnant of a great many I checked in the fall to thin out old paperwork. I’ve spread them out for this picture to give you a sense how difficult it is for me to give up stray thoughts. Today’s sermon was no exception. Based on First Corinthians 18-31. Verse 27 stuck out at me. “But God chose the foolish things of the world to shame the wise; God chose the weak things of the world to shame the strong.”

It wasn’t the beginning that stuck out but goodness knows I don’t mind to have people call me foolish, It was the second half about God calling on the weak to shame the strong. Perhaps that could mean the Trump supporters are weak and using Donald Trump to shame the economically well off who oppose him. Or (and my preference) it could mean that Trump is strong and that those rising in opposition to him have been made weak and are to challenge him. I take a Lincolnesque view of this. I have no idea which side God is on.

In my youth there is no question that the ten percent of our population that was black was almost universally black. They had a black champion too Cassius Clay, later known as Muhammed Ali. He defied white authority with an impunity not unlike Donald Trump. But he wasn’t handed millions of dollars as a kid he came from nowhere to needle white America. Trump is no Ali. I loved Ali like Trumplicans love Trump. At least Ali wasn’t laughing at his followers behind his back. He was one of them.

I made a follow-up video to the one I put up last night. the first addressed “Trump America.” The second was addressed to people wishing that Trump would a one-term-President. I’m debating whether to upload that video or shoot a new one. One of the other should show up here soon.