I think my Buddy and I are grimly determined to keep harassing each other through this dispiriting Presidential contest. Afterwards I suspect we pick up the pieces and continue our quibbling. If so, we may end up a little better off than the Facebook unfriends, and the marriages under threat from divided loyalties.

After my latest post carping about my Buddy he sent me the following email with the now familiar picture of the Clintons and the Trumps in more amicable times. The column by Maureen Doud begins with a spot on paragraph describing the photograph of the two power couples:

As has been said, if you want a friend, and not a shakedown, get a dog.

“The friendship, on both sides, was a transaction. Not personal, as they say in the “The Godfather” — just business. Trump’s life in New York was all about promoting the brand and making money for the family business. It was the same for the Clintons. A former Clinton White House official puts it more bluntly: ‘This was a classic Clinton go-where-the-money-is move.’” 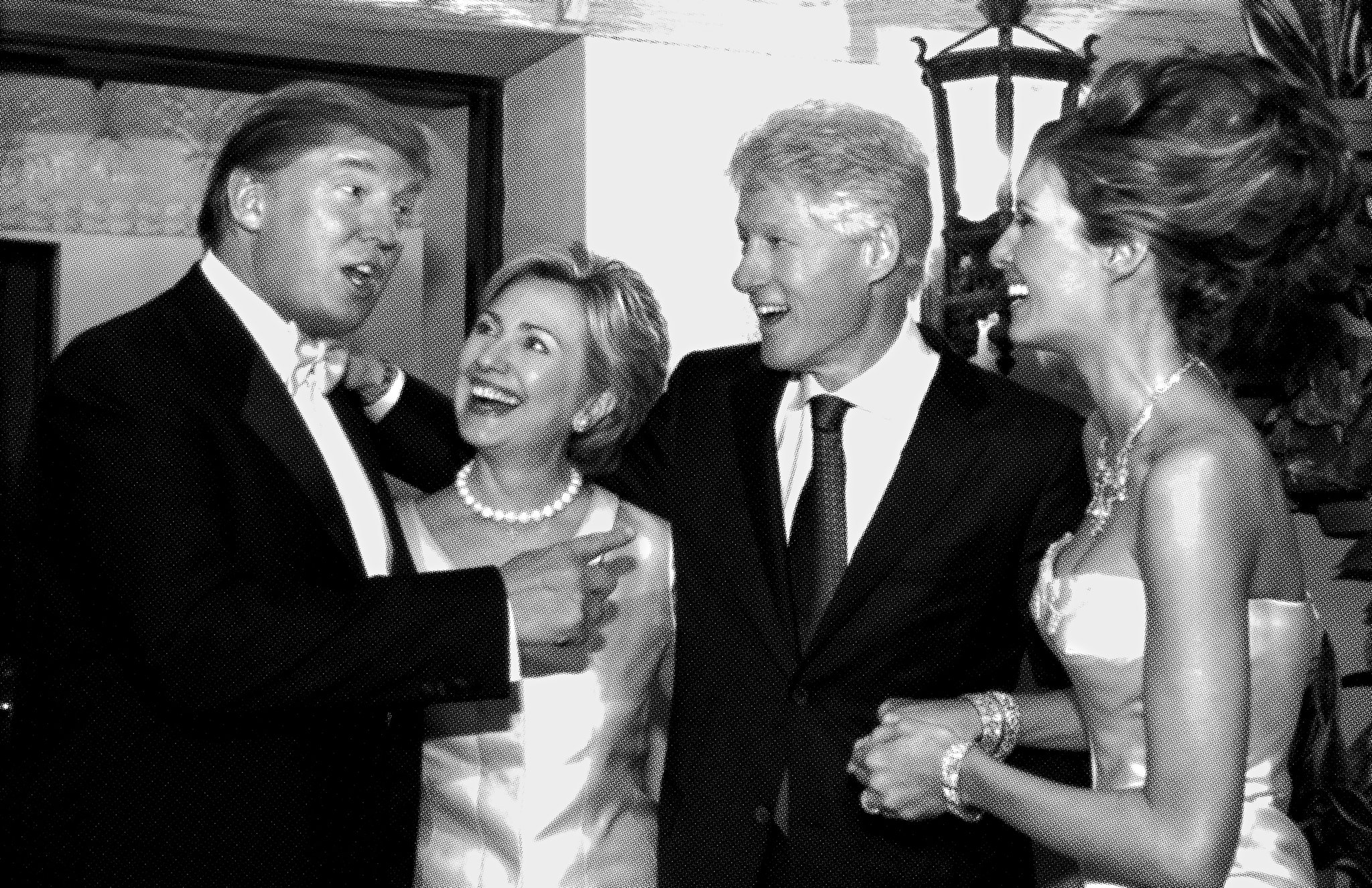 This post, like all others in this blog about the 2016 election, has been categorized under “Trump 2016” not something more generic like 2016 election. That makes sense to me after the last year. Trump, for good or ill, will define who we have become as Americans more so than Hillary Clinton. Certainly almost half of America’s voters will cast ballots for him and do it knowing about a great many disqualifying or seemingly disqualifying character traits and past history.

I want to make this clear. I don’t particularly like Hillary Clinton. I have curbed my criticisms of her in front of Claudia because my poor wife has heard them for years and they all remind her of the crap she has had to put up with for a lifetime. If you are a woman you can’t be assertive for fear of becoming a bitch.

Forty years ago Claudia went to one of the last gasp gatherings of women who were pushing for passage of the Equal Right’s Amendment (ERA) and was appalled at the fundamentalist ministers who crashed the party and who were directing their women congregants to challenge the women’s libbers.

Like the wizened and once randy PTL shill, Pat Robertson lots of these evangelical types have returned this time to defend the grinning, pussy grabber.

As long as the pussy grabber stuck to his glitter and glamour routine I had no problem with him. As the photo above makes clear neither did Hillary Clinton. Maureen Dowd rightly describes the Clinton/Trump “friendship” as being “transactional.” Trump could bask in the glow of having an ex-president at his third nuptials. Clinton could count on getting some campaign funds from the bumptious billionaire.

I didn’t have a problem with Trump until he decided to be a Demagogue. I place most of the blame for the public’s current receptiveness to Trump on the GOP whose Pat Robertson types did their best to shrink Reagan’s big tent down a pup tent.

As for Hillary, while I have no fondness for her I see in her my wife, my daughter and countless other women. “Nasty Woman!” How the hell can the voting public let a US Presidential candidate get away with that? or get away with calling his opponent “crooked?” or saying he’ll put her in jail when her worst crime was trying to hide her vulnerabilities from the Republicans who have spent thirty years investigating the hell out of her? or hinting to gun fanatics that they might consider assassinating her? Hillary Clinton may not be soft and cuddly but the Donald Trump of this campaign has been loathsome.

Yeah Buddy. I take little comfort in the polls. Trump may beat Hillary. He’s got some Big Mo now and, no, I don’t think he’s Adolph Hitler. He’ll just be America’s first presidential demagogue. He’ll make sure the trains run on time after he kicks 20 million Americans off of their Obamacare insurance.

And about that Maureen Dowd piece. It’s a wonder of insider Intel. The last paragraph even gave me a glimpse of Donald Trump that was both sympathetic and revealing. That was a first after a forty year stretch. Even so, I still think he’s loathsome. I guess that makes me an elitist.