I surprised myself and just cranked out a couple thousand words in Part 3. I didn’t in-any-way proofread or polish it. I might just do the same here about my last day in Mankato a little over a week ago. or I might not. I JUST DID IT….BUT I’M NOT GOING TO EDIT IT EITHER.

I drove to a new hotel on Saturday night at a little past midnight. Had I left for Duluth after our dinner I’d have missed a lot of catching up. I didn’t rush to sleep. I still had 1 and a half Otaknams to review to see what my classmates were saying fifty years ago. Otaks…and Old trick. Read the full word backwards.

I decided before I headed to the bluff country east of Mankato to drive along the Nicollet County Road I used to bicycle to look for Rose Breasted Grosbeaks and Indigo Buntings. It was just North of the Minnesota River opposite Mankato’s Blue Earth County. Along the way I discovered a waterfall I’d never heard of before smaller than the Minneopa Falls on the opposite bank. Before stepping far from the road to take a look I read a modest plaque that mentioned Ray Sponberg who had helped draw attention to the forgotten locale. He was the Father of one of a Senior debater when I joined the team as a Sophomore. She was a very nice person and her father had taken Chartered Live Underwriter classes from my Dad at Mankato State. I snapped a picture of what was once a campsite for Sioux Indians long since banished to the Dakotas. 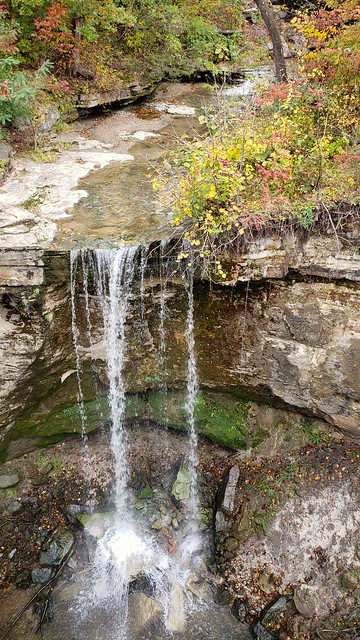 I meandered for a while along very pretty autumnal roads and then headed to the cabin where the Reunion committee was gathering. I guess my sitting in the High School parking lot gained me admission. It seemed a remote place under a heavy canopy of fall leaves. I’d get a chance to chat with a couple more folks before I left.

One of my classmates who hadn’t come had sent me an email asking if I might go. He’d done the same thing ten years earlier. He too was one of my debate teammates. Its worth mention his story as it will blend into the another story from another absent Debate teammate…..the first girl I ever dated.

I had met M (this time a boy) in seventh grade with I was talked into going out for the Gymnastics team. I could do a front handspring and to be honest I loved watching the gymnasts for than any other athletes at the Summer Olympics. I wasn’t six foot two back then but I was head in that direction and if you know acrobatics height is a genuine impediment.

Our tiny North Mankato contingent was put on an after-school bus that drove us to Mankato’s Franklin Junior High where, between us, we had just enough sad sacks to have a single dual match each year with Mankato’s Lincoln Junior high. The person I remember most from those days was M. He was a skinny awkward kid, who was desperate to prove his worth. He was half Sioux Indian and looked full blooded. He had been adopted by a sturdy German-American couple as an infant. He didn’t tell me this until we were in Debate a few years later but his native ancestry overwhelmed the Scandinavian. One of my high school classmates irritated by M’s fierce determination to be best at everything called him “Red Cloud.” M approached Debate the way he had Gymnastics or getting good grades – with a great deal of intensity. Later before my Dad made me quite Tennis because of a D on a report card we also joined that team. Mike was even more awkward on a Tennis Court but by God he got pretty good at playing a tenacious game of tennis before he graduated. In college we would get together over summers and play chess too. Did I tell you I hate playing Chess with an opponent who has to win? I didn’t care about winning that much but in the college library I once happened on a very slim Chess guide with I checked out and read leading to the only time I ever beat M. Darn it if M.could never remember me having beat him once.

M would continue to be one of my few long standing classmates with whom I reconnected once we got to the email age. He gave Claudia and I an ironing board for our wedding and was one of my groomsmen. My Uncle Frank thought the give was ridiculously utilitarian but we used a lot more than the hoity-toity silver pieces some of my relatives gave us. I think we still have the same one.

M didn’t come to our reunion but we assured each other that we would somehow cross paths again. We’ve done this several times but haven’t managed it. M went on to a career in the Foreign Service and lives out east. We’d started talking foreign policy after our gymnastics practice in 1967. I was spouting Anti-Vietnam stuff that I was hearing from my Dad and our Gymnastics Coach came in and took me on. Today there are not but-in-sky teachers around when we talk about Afghanistan and Pakistan where he spent several tense years.

M had a crush on the debater who asked me out on my first date as a sophomore. She had long straight golden hair and a scandihoovian name. She was in my English class where I impressed lots of girls by giving a humorous speech introducing myself to the class. I was was a class assignment and I was terrified because I had yet to put my Dad’s advice to be a debater into practice to avoid another panic attack. Dad came through again with the advice to joke around. At any rate in the middle of the year S asked me on a date. It was for a Saddie Hawkins Day dance which, just like in the lil Abner comic strip required girls to go after boys for a date. I was so shocked all I could tell her was I’d have to go ask my parents if this was OK with them.

As a few of my loyal readers know my Dad was thrilled with this turn of events. S’s mom drove us to and from the dance and we went out for pizza imbetween. She gave me a traditional compost like corsage and Mr. Frank the Speech teacher was probably Marrying Sam who tied our knot.

S like M (the girl) and M (the boy) were all much better debaters than I was an in no time I became part of the B team.

I quite debate after my junior year having been paired with L now deceased. L. was a “jolly” fat girl who was mercilessly teased in those days before half the school population grew to be plumpish. Her laugh was a defense mechanism used to bat every insult aside as though there was a competition going on. After college she joined a weight reduction program and slimmed down. There is no telling how scarred she was by years of belittling. M the girl also quit debate. S and M the boy continued on and near the end of our senior year M began dating S having developed a serious crush on her. When she broke off with him he couldn’t barely contain his loss.

I didn’t put two and two together until after college when a classmate told me that S had become a major spokesman for the University of Minnesota Gay’s. Thinking back I recalled two possibly tell tale events that foreshadowed this. S once cracked a joke about a nun doing push ups in a cucumber field for sexual release. I think you would have had to be there to see why this odd joke stuck with me. And then in the Christmas Party after high school I was entreated to host S came in and brought a Dylan album to play over and over and over again. She parked herself on the floor for an hour listening to Bob Dylan sing “Lay lady lay, Lay across my bog brass bed.” I was almost too busy cleaning up after my careless classmates to be too annoyed with seeing S remain glued to this song for an hour but I was still a little annoyed with this odd behavior.

Which reminds me of another discursive bit before I wrap up. At the Friday night get together I had a chance to be a bit of a raconteur about my political shenanigans with our old Class President who has dabbled in politics himself, behind the scenes. I told him about my Voodoo experience but had the most time embellishing the story of this Christmas Party. My parents had only a few weeks earlier completely replaced our furniture and installed a new carpet. Someone suggestged that it being winter we start a fire. I put in a log and fired it up……for about twenty seconds when rolling plumes of smoke began flooding the living room. I fiddled with the flue but the catch only spun around helplessly. Scott, later to become a Mankato policeman rushed into the breach and picked up the burning log and dropped it on the new carpeting. Then he picked it up again and dropped it again. Then he did it a third time saving his poor hands from blistering. Then he finally picked it up a final time and rushed to the door to heave it into a snowbank.

Actually Scott was with us Saturday night and he reminded me of this incident. I mentioned how many times he dropped the log in my telling and good cop that he was said. I only dropped it once. “That’s true,” I told him, “but a good story teller never lets that stop him from improving on a good story.”

Well, some years later yet another classmate of mine who was teaching in Duluth told me that S had been a lesbian. It all sort of added up. Sadly, I could see the sense of disapproval in his telling me this. Thank God those days are passing swiftly. But ever since I’ve enjoyed knowing that my first date was a gay woman. And that fact was confirmed by yet another of my original sophomore debate teammates on Sunday as we were sent out on a scavenger hunt. We too had gone out on one date in high school where she had explained how she was stuck attending Mankato State because her Father’s hand to mouth farming operation on a very expensive piece of farm property made it impossible for her to get any scholarships for a more rarefied college experience.

Now on a hunt for a snail shell a feather and some moss she told me how her fiend S stayed close through college a fact I’d been unaware of. And yes S was gay or bi or something. She had been trying to figure that all out. And I was her first date too.

These four largely unedited posts about the glories that are public education sort of misses my intention. However, I went to school with a lot of bright kids who, for the most part, grew up to be bright adults. We were part of the baby boom, at least the white baby boom, who got good schools that took our education seriously. It was a joy to see my old class again.

As I run for the School Board for my eighth time I’ll keep those memories in mind. If elected in two weeks I’ll do my best to do justice for all the kids in the Duluth public schools so that when some of them return to Duluth for a fiftieth reunion it will be as special as my fiftieth was to me.