Greenland is sliding into the sea, the economy is poised to tank next year or the year after Donald Trump’s reelection should that occur, Brazil’s forests are under assault as one of the new Internet Era’s collection of pseudo-fascist, plutocrat-hugging, mini-Trumps is setting armies of murderers out to kill the locals in order to burn down the Amazon for more methane spreading cattle ranches for Big Macs and yet I’m feeling pretty happy this rainy morning.

Claudia just baked our old favorite blueberry buckle, in our new stove, in our new almost finished kitchen and I used our spiffy new microwave to reheat my coffee. The old fridge is out of our dining room! I saw another compelling episode of Mindhunter (season two) last night and it involved Charles Manson who I was recently reading about. My campaign fundraising letter is about to be sent out to at least 2,000 of my 12,000 potential constituents. I’ve thought of a cool way to speed up an initial burst of lawnsigns by the end of the week. I got back to my book writing yesterday after a week of putting up new church storm windows. The writing went very well – although – its becoming obvious my early hope of having a book ready for shipment a month before the election was and is wildly optimistic.

Sometimes in face of even dire threats to your grandchildren’s future you have to be positive. In fact, I hope my Grandsons can help me preserve the Duluth Schools and reelect me to the Board after my glorious two-year hiatus from the sometimes wretched politics of the School District. What else can I say? I’m an optimist despite all evidence to the contrary.

Its almost 10 AM and I’m eager to begin writing again. This post is to assure my regulars that I’m still focused on the Duluth School District and also to assure them that I remain busy with life as well as the great issues of the day. I have never accused myself of being myopic!

After I race through today’s French studies I will post a couple of stories from the New York Times that caught my attention. One is about Germany’s role in the world economy and the other is about Jeff Bezos’s shoddy treatment of words……Not the Washington Post (thank heavens) but the unfolding booksales his company built its foundation on. So, Vive la France! Vive la litterature! Vive l’economie du la monde! Vive l’idiot! (That’s a reference to my book on Public Education. I’m hoping its sales will finance my school board campaign) 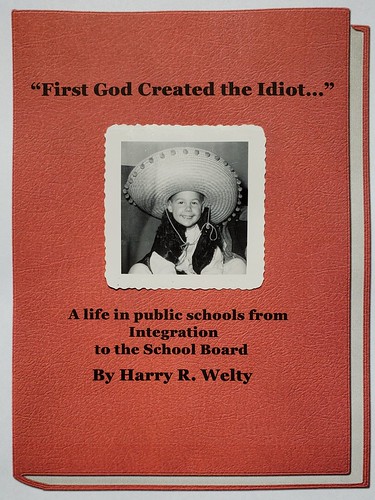 A fifteen dollar donation will get you one of these babies. Order here: