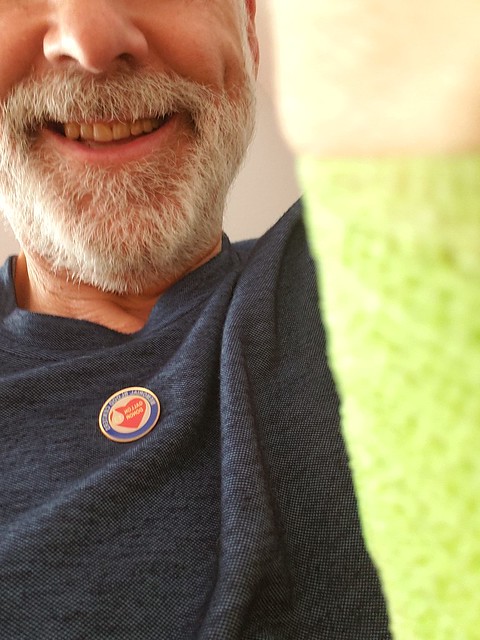 I’m just back from donating my 13th gallon of blood. Its four draws past one hundred gallons which I celebrated in the Reader last December. Too bad i mowed the lawn yesterday because this would give me an excuse to put if off a day being so empty and all. I chose a bright green bandage and you can see my 13 gallon pin. I don’t know if that’s bad luck or not. It doesn’t seem so. I just deposited five more donations which I think brought me over the $1000 figure which is a third of the way to being able to afford to print my book.

I’m working hard on the book and feeling confident that I will come close to making my self imposed October 24th deadline for having it ready for the printers.

I sent my grandsons off with Claudia and their mother for a five-day family church camp. I forgot to show them that their Venus Fly trap can take care of itself. It’s many little clampers sat empty inside our house but when the warm weather hit I put them out by our garden. four biters are filled two of them with what I think are daddy-long-legs. At least it looks like a bunch of long legs are sticking out of the “mouths” all akimbo. 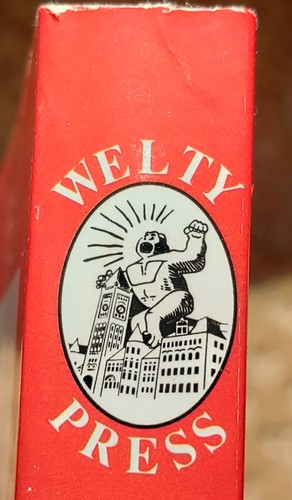 In the absence of my family I’m hauling posterior to work on my campaign. I’m setting up Welty Press again after a hiatus that has lasted since 1992 when I published a book to sell for my Congressional Race against Jim Oberstar as an independent candidate. This time I do not plan to print 5000 copies but a tenth of that…..unless the sales pick up considerably. I can always print a second edition if there is enough demand. And I’ve got it figured I only need two hundred sales to roughly break even.

I’ve added another five sales to the thermometer. Its a small improvement but every little bit helps. 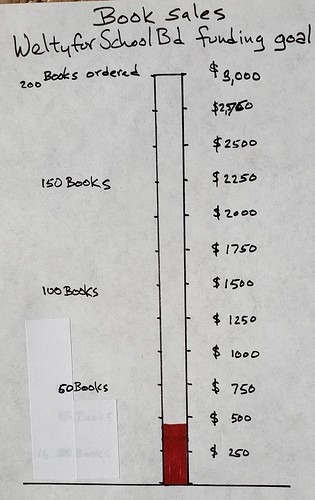 I’ll keep thinking of lame ways to bludgeon folks into dispensing with $15 (or more) bucks to finance my campaign….like my 8 great reasons to buy the book.