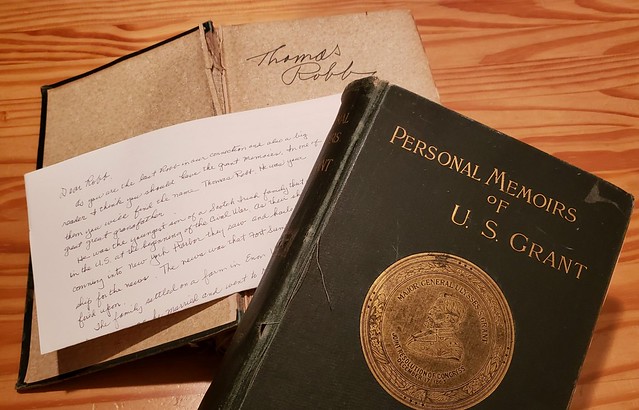 At the Quora site on the Internet in which people ask questions and experts show up out of nowhere to answer them I read this quote attributed to Ulysses S Grant about his Confederate opposite General Lee:

What did Ulysses S. Grant and Robert E. Lee think of each other?

Answered May 29 by Jim Hopkins

Grant on Lee: “I never ranked Lee as highly as some others of the army — that is to say, I never had as much anxiety when he was in my front as when Joe Johnston was in my front. Lee was a good man, who had everything in his favor. He was a man who needed sunshine. He was supported by the unanimous voice of the South, he was supported by a large party in the North. He had the support and sympathy of the outside world. All this is of immense advantage to a general. Lee had this in a remarkable degree. Everything he did was right. He was treated like a demi-god. Our generals had a hostile press, lukewarm friends, and a public opinion outside. The cry was in the air that the North only won by brute force, that the generalship and valor were with the South. This has gone into history with so many illusions that are historical. Lee was of a slow, conservative, cautious nature, without imagination or humor, always the same with grave dignity. I could never see in his achievements what justifies his reputation. The illusion that nothing but heavy odds beat him will not stand the ultimate light of history. I know it is not true. Lee was a good deal of a headquarters general, a desk general, from what I hear, and from what his officers say. He was almost too old for active service — the best service in the field. At the time of the surrender he was fifty-eight or fifty-nine, and I was forty-three. His officers used to say he posed himself, that he was retiring and exclusive, and that his headquarters were difficult of access.”

I grew up hearing that Grant was a bloody general and a crooked President. I no longer regard that appraisal as anything other than sour grapes. The quote above probably comes from his famous memoirs written hastily just before his death so that there would be something for the impoverished President to leave his family. First comment. This appraisal is well written, concise and insightful.

Secondly My Mother left her grandfather’s volumnes to my son who has yet to pick them up. I looked at them just now and found the note my Mother composed to her grandson. The note was touching and my eyes watered remembering that she too once was a woman with remarkable insight later lost to dementia. In the note I discovered that I had been telling an old family story wrong for the last couple decades. I put a picture of the set up above: