The New York Times has apologized over this cartoon which was in their International edition printed out overseas. A Jewish caratoonist from Europe agreed in an NPR interview today that it shouldn’t have run. Yeah. Anti-Semitism is raging across Europe and Trump’s crowd has marched with tiki torches shouting “Jews will not replace us.” But I am not so appalled at this cartoon. Seeing eye dogs are venerated in America even if generic dogs are sneered at in portions of the middle east. Showing Bibi Netanyahu leading a blind Trump is accurate symbolism. Its ironic that Trump who has a daughter converted to Judaism would say of the Tiki torch bearers that they included “good people.” Our President is a cretin. 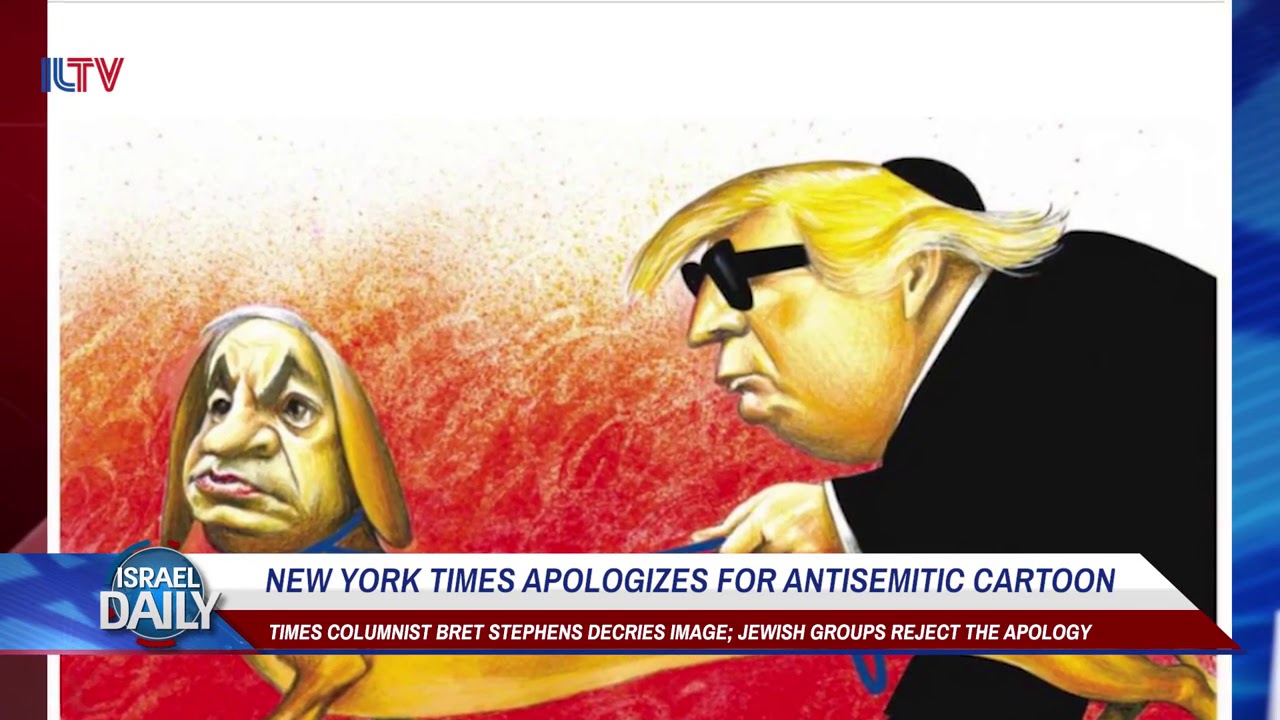 The cartoonist on NPR mentioned that America’s cartoonists are a vanishing breed compared to a couple decades ago. He also commented that he sympathized with the pressures on cartoonists not to offend people. He mentioned Jewish cartoonists who took on Hitler and their persecution. I wrote about this myself last year…………..

I am reminded of the Jewish attorney Alan Dershowitz. Long ago he defended the free speech rights of Nazi’s who generously decided to apply to march in Skokie, Illinois a city well known for having a significant population of Holocaust survivors. Today he is a shill for Donald Trump. I support free speech. I agree with the sentiment behind the cartoon. I don’t find it offensive. I only find the actions of our President and Bibi Netanyahu offensive. I had dinner with Bibi once……Don’t bother if you’ve already read my post about the dead Palestinian.

One of the things people who have been treated poorly do is turn the tables on their harassers. For instance in America’s black community there is a huge market to collect the stereotypical negro images once used to sell all sorts of products. You see this on the Antique’s Road Show frequently. One of the strangest things I ever heard was that in the Radio Era black folks tuned in to the horrid Amos n Andy show. Two white guys mimicked stupid black men called Amos and the Kingfish. It was pretty clever writing and blacks who were kept in the shadows were eager to hear themselves depicted publicly even if their depiction was was cringe worthy. A similar thing happened in the 1970’s as the Civil Right’s Era was making headway. The hugely popular All in the Family panned a racist blue collar worker “Archie Bunker.” Real Archie Bunkers (yesterday’s “Deplorables”) turned in to watch the most popular program on TV even though made them look like meatheads. They didn’t take the liberal message any more seriously than black listeners took Amos and Andy seriously.

Ten hours ago, deep in thought, I had all these pieces nicely tied together. Should have written this then. Oh well. The three bits stand up on their own even if I haven’t quite threaded them together. My earlier NOTE explains why I let ten hours slip by without pulling my sewing needle out:

NOTE: I’m busy sorry. Just after I wrote the previous post about organizing my office I got a call from the contractor who will be remodeling our Kitchen. He waited for Claudia to heal before starting. He’ll start right after this weekend. We had to start emptying out our kitchen. It will take some time. The post will hold.