I have a week to organize myself for my school board campaign. I’ll have two shots at a Reader column before its publisher cuts me off as a candidate. I sent one in today. It contains a cartoon I drew borrowing heavily from a children’s illustration. I figure that I’ve had a year to undo the damage Donald Trump inflicted on my school board campaign in 2017 by leaving Duluth’s outraged voters under the mistaken impression that by voting against me they were voting against Trump. Actually, I have enjoyed my vacation from the School Board and the Superintendent. Thank you Donald.

Here’s the cartoon. You will have to wait until the Reader comes out to see how its used. 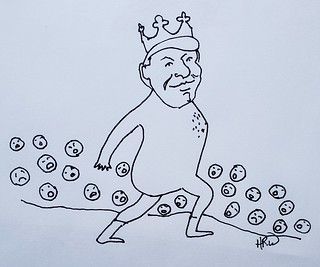 Since the blog will be my daily contact with voters I’ve gotten interested in seeing how much attention it attracts by analyzing this year’s blog stats. Although less than half complete June is by far the most visited month for a long time, maybe ever. I’ve averaged 4,674 page views a day. And each “pageview” includes twenty posts.

In looking at my blog I checked out the very first post from March of 2006 where I declared my separation from the Republican Party. I also just discovered a post meant to be a quick reference to finding stuff on my first website: www.snowbizz.com.