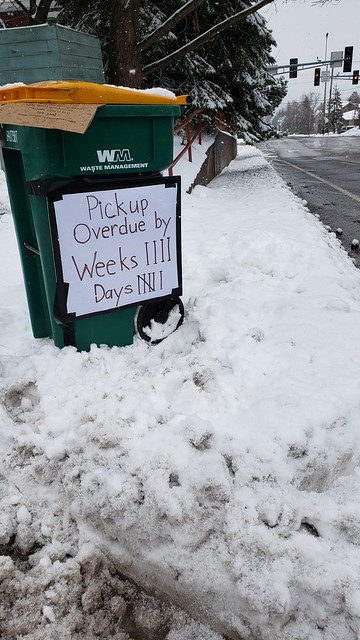 When I first moved into my house some traffic engineers made an official count of how many cars drove by our home daily. It was about 21,000. That was 32 years ago. It may be double that figure now.

Until this January I had never had any trouble with my trash and recycling pick up by Waste Management. After about six failed pickups I was tired of calling Waste Managements’s call center to complain that no one was picking up my garbage or recycling. I waited a day for the “Bomb Cyclone” blizzard to be over and I put my recycling next to 21st Avenue’s traffic as a little advertising. When I came in from putting it up my sweetie told me that minutes before the local office had called to say they thought our stuff had been picked up yesterday. Its the first time for the past three months we’ve gotten such a call after all our complaining. They were about to send someone to pick it up.

Before they got to our house I brought took the recycling bin away from the Avenue and put it by the alley but I kept the sign on it for the recyclers to see. While I was at it I took out three more bags of recycling to haul off as well. 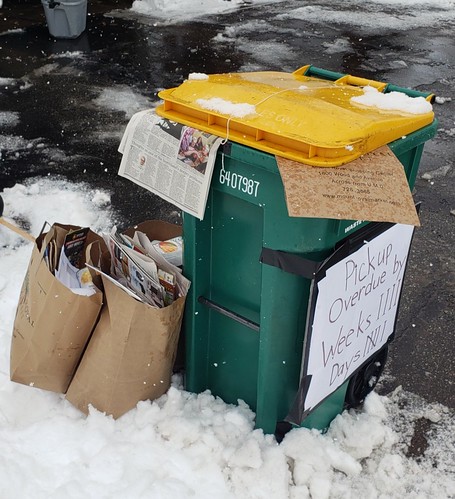 Not long afterwards a pickup sidled up to retrieve my refuse. I went out to chat with the picker upper. He had already taken my sign off and was tossing the extra sacks into his pickup. He asked me if I was Welty and I said I was. He then introduced himself and I immediately recognized his name as one of my former Proctor students. He’d changed a bit over the previous 45 years. We had a cordial conversation and I told him how nice I’d been to the innocent call centyer folks who had no control over Duluth’s Waste Management management. He told me he’d taken my sign to show to the fellows in his shop. He asked if it had really been that long since my last pickup.

My sign had only been up for about ten minutes so my public protest ended quickly. Tomorrow they are scheduled to pick up my garbage. I’m keeping my fingers crossed.

After I came back inside I practiced my part in tomorrow night’s Symphony Chorus. Having seen my recycling hauled off my singing soared. Too bad I’m not one of the soloists.