We pulled into the LBJ Ranch joint National Park/State Park Visitor’s Center with five minutes to spare for the tour. The area was suffering from an infestation of caterpillars which dangled in the hundreds from the live oaks overhead.

We stopped at the reconstructed home that LBJ was born in. It was rebuilt by Johnson after his retirement from the Presidency. It was furnished with fancier furnisings than the more modest stuff the Johnson’s owned at the time of LBJ’s birth in 1907. Johnson probably wanted to commemorate both the poverty of his own Lincolnesque “log cabin” beginnings as well as the well-to-do life that his parents achieved.

We stopped at his family grave. His was the tallest stone in the plot but it was modest by the standards found in almost any big cemetary in the US. The 300 year-old live oaks inside the stone fence surrounding the cemetary made it a lovely setting.

At the Ranch the  bus stopped so that we could wave to Ladybird who happened to be sitting on her porch with a friend in a rocking chair. We waved and she waved back. When she was younger (Ladybird is 93) she would often board busses to say howdy to the tourists. 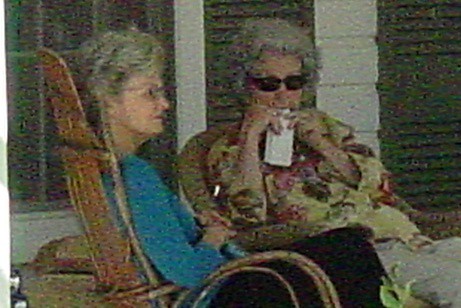 I was reluctant to take a picture but in the last instant decided that she wouldn’t mind. It’s not the most flattering. I caught her just as she was nibbling at an envelope in her hand.

Our guide ended the tour by playing the soapy Peter Paul and Mary rendition of Dylan’s Blowin in the Wind. Johnson never got to send me to Vietnam. Apparently he used to weep over the casualty lists. Damn him.

We drove past the drive-by showroom he built for his old cars, a couple lincoln continentals a hunting car with a bar and a sky blue german vehicle with the prow. We heard a recording of some advisor telling about his visit to the Ranch and being driven around the Ranch in the car by LBJ. As Johnson drove towards a pond on the ranch he began yelling that the brakes had failed.

The visitor tried jumping out as the car splashed into the water. Johnson roared with laughter and accused his guest of being too eager to abandon the President in his moment of crises.