My eyes are too big for my stomach for history books! 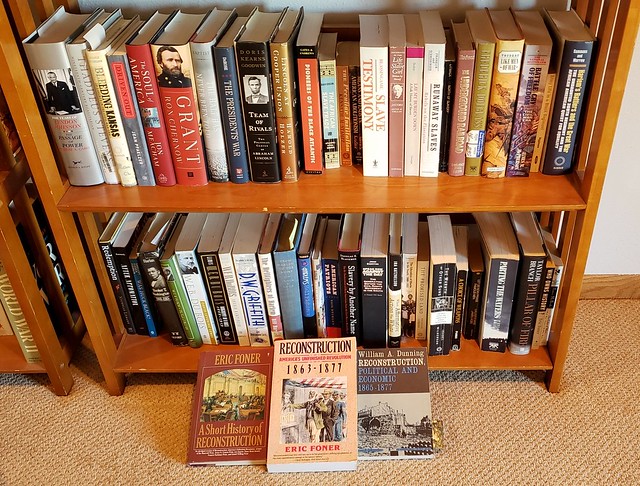 These are my library’s selection of books about African-American history and part of my collection related to the Civil War which arguably is pretty much the same history.

I haven’t read them all. I describe the books I buy but don’t read immediately as being like planes circling an airport waiting for clearance to land. Another plane is close to being added to those circling my bibliographic airport. Its The Stony Road by Henry Louis Gates known to the PBS viewers for his series on family history.

I didn’t know he was about to launch a book let alone on Reconstruction. A week ago, however, I bumped into an old NY Times story about Gates in which an interviewer asked him for the books he had been most moved by. He mentions three or four including one that was sitting behind my computer Reconstruction by Columbia University historian Eric Foner.

All my life I’ve tried to find the Cliff Notes version of everything so that I would have time to become knowledgeable about all things. It has not really worked. There’s just too many books. But I did buy Foner’s book thirty years ago only to discover that he had an abridged book by the same author. I once wrote to Foner asking him (stupidly I admit) what I would find in the full version vs. his Cliffs Notes version. He was kindly un-sarcastic in his reply to me.

So I was surprised to see that Gates has written his own history of Reconstruction taking it through Jim Crow. I am strongly inclined to read it which means buying it too.

BTW – Gates is the fellow that another cranky white lady called the police on when she saw him entering his home in Boston. He was arrested by a white cop and that led to the first proof for Murdoch oriented white nationalists that Barack Obama was a raging black monster when he said the cop over reacted. That led to the obviously raging Obama to hold a beer summit between Professor Gates and the policeman in the Rose Garden. Heavens!!!

Thank God we have the sensible Murdoch-approved Donald Trump presiding over America today.