Last night for the second time I risked my cell phone’s melatonin messing blue light to watch little snatches of the cartoon Peppa the Pig in French. Between the cartoon’s pictures, its elementary vocabulary and my fifteen months of study it almost seems like I could understand the language if I could only squint my brain enough.

A year ago I wrote a column about my intent to learn a second language in the Reader in a column titled “Pardon Mon French.” That was after three months of studying. Now I’ve got a year and three months under my belt…..except for the month of September last year. That’s when I was actually traveling through France and didn’t have time to keep practicing if I wanted to see the countryside. I had nine months of French practice under my belt and I was hopeless.

To my surprise I resumed my study within days of returning and have added another six months of study. I don’t have any expectation of spending a lot of time with French speaking people but that could change if I actually begin to find myself understanding and speaking it. The US State Department lists French as one of the three easiest languages to learn. The State Department says it takes about 480 hours to become conversant.I presume their preferred teaching methods are a lot more intensive than my home study without other speakers to guide me personally. I am probably beyond that level of time spent but comprehension still eludes me. I take heart in the experience of a polyglot who gave a TED talk type presentation before other polyglots. Polyglot = multi-lingual.

This young lady spoke about six languages. Her presentation followed a year of visiting other polyglots and asking them about their method of learning. She found, as I would have expected, that no two multi-lingual speakers study in exactly the same way. I found their stories very hopeful. All were in their twenties when they began throwing themselves into languages. The speaker had a very useful motivational quote. “The best time to learn a language” she explained “is when you are young.” She added, “The second best time is now.”

This speaker claimed to have spent roughly an hour a day learning new languages. She explained that polyglots generally had a little corner with all their teaching/learning tools, books dictionaries, etc that they cuddled up with. Here’s mine: 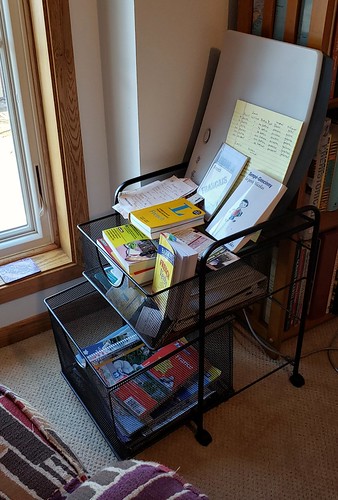 This young woman told her audience that with her studying regimen it takes her two years before she suddenly finds that she can speak and understand the language she has been learning. (She advised against studying more than one language at a time which a lot of the folks using my preferred AP Duolingo are not abiding by.)

I often put in more than a single hour but then again I’m older and more set in my English speaking ways. I won’t have put two years in until my Birthday rolls around again in another eight months. I did visit France. I paid homage to my Grandfather. I am fighting off Alzheimers. I am giving myself a reason to visit a French speaking country again. I was motivated also to read a half dozen books on France and its history which is so inextricably linked to America’s. Otherwise, I can’t say this work will have made the world a better place. I will never be likely to write anything significant in French……not that I have either in English. I think the study and my own progress is its own reward.

I did have one particular example in mind when I set out. He was one of the last muckraking journalists of my youth, I.F.Stone. The preceding link to his Wikipedia page offered some new insights on Stone who was suspected by some of once being a Soviet agent. Whatever else he was at an advanced age he re-enrolled in school and got an advanced age in Ancient Greek. He put this to use to write a book I enjoyed “The Trial of Socrates” about one of my intellectual heroes. I enjoyed the book. Stone wanted to be able to read all the original Greek texts in ancient Greek to understand Socrates’s execution by Hemlock. The thing I carried away from the book is a distaste for sophists. Today their equivalent would be the spin-meisters for political parties. They are bought and paid for political hacks and a lot of them have nationally syndicated columns blowing smoke into people’s heads.

Stone was retired and 61 when he began his studies. He died twenty years after this book was published. That gives me some time to write a book. Like his mine would be in English…….if I ever get around to it. In the meantime, Peppa will remain my bedtime companion.