I had Claudia order this book five or six months ago. As she’s been stuck at home recuperating from her heart surgery she suggested I read it to her. Its quite slim. By Zora Neale Hurston, Barracoon, was completed in about 1931 but only recently published. A Barracoon was a place where African prisoners were held before being put aboard the ships of Scottish and Yankee slave traders. Hurston learned of the last living slave from the last shipment of slaves to the United States (the ship “Cudjo” was transported on ran a Civil War blockade) and went to interview him about his life.

The book faithfully records his simple dialect for the sake of authenticity. It reminded me of something I have been thinking about recently. Black Americans sound different today than they did when I was a kid fifty years ago. Although a few blacks have sounded “white” since the days of house slaves; the vast majority, deprived of educations and sequestered in slave quarters, developed a distinctive patois. In the 1960’s Julian Bond was an exception with his then distinctive Middle American voice. (Here he is in 1982 making some sound observations about Socialism that would echo in the face of today’s Republican hysteria on the same subject.) Today the acting world is re pleat with black actors whose voices betray only the slightest hint of growing up in an inner city or south.

Here’s Cudjo talking about the Barracoon:

“Dey placee us in de barracoon and we restee ourself. Dey give us something to eat, but not very much. We stay dere three days;, then dey have a feast. Everybody sing and dance and beatee de derum.” … De barracoon we in ain’ de only slave pen at the place. Dey got plenty of dem but we doan know who de people in de other pens. Sometime we holler back and forth and find out where each other come from. But each nation in the barracoon by itself.”

Of course, nobody talks like that anymore. There was a brief five year fashion for the ridiculous “ebonics” dialect in the 1980’s or 1990’s. Ebonics – Ebony, Get it? But while people looked down on are inclined to exaggerate their differences out of indignation those permitted close proximity with the “superiors” have a powerful incentive to conform and even surpass them. Other than being far more likely to be sentenced to jail for the same crimes and sentenced for longer periods, and shot by paranoid police, black Americans are far less isolated from the larger society and even when they are more likely to live in shabbier neighborhoods they can seem themselves happily living side-by-side with the larger community on idealistic television series. I have no clue where Jack Benny’s servant Rochester lived. “Yas sir Mister Benny.”

I suggested to “Juan Percent” that the Jewish influence on Hollywood had been positive and movies while often crudely pigeon holing blacks in step’n fetchit (see 8th paragraph here) roles has also pushed to bring them into the wider world from Sidney Poitier to Uhura’s kissing Captain Kirk to damn near every role played by Denzel Washington. Had those Hollywood role models not been placed before white audiences Barack Obama would never have been elected President.

But what prompted this post was another book I just read a review of in the Manchester Guardian. It echoes what I read about how the slave trade affected West Africa in a book which I read in 1993 called the African Slave Trade…

The book that the Guardian reviewed was A fistful of shells by Toby Green. Green makes the same argument that Davidson did forty years earlier only without my reference to President Donald Trump. It is this, the “****hole” countries of Africa became that way because the Industrial labor needs of the better armed Western nations required massive depopulation and despoliation of Africa. Warfare captive slaves corroded some spectacularly advanced African empires bringing them to such an impoverished state that by the conclusion of the slave trading era (In Brazil about 1888) that the Europeans were able to finish gobbling up Africa. In fact, Germany’s late entrance into colonization was one of the primary causes of Kaiser Bill’s petulant desire to revenge himself against France and England. And once consequence of that war was having a million African subjects drafted into France and England’s trench warfare. My Grandfather’s Harlem soldiers were put in French lines besides a division of African soldiers when they fought in the Meuse-Argonne campaign. 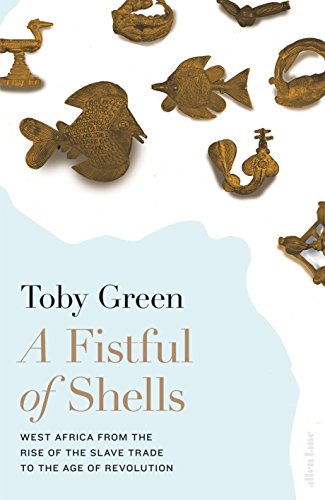 Like Donald Trump Europeans knew nothing about the great African civilizations they they despoiled. Greens book begins when British troops wander into one abandoned African capitol and loot a treasure trove of brass objects d’art that they felt free to abscond with because it was obviously the work of someone far more civilized than the pathetic Africans they were bringing into the Empire. Not a surprise. The had already brought the Chinese Empire to its knees because the emperor tried to prevent British “businessmen” from addicting his subjects to the lucrative opium trade. (Thank God the Mexican government isn’t better armed than the United States!!!)