I was surprised in Bruges, France this September when just past the city’s great cathedral I found a philatelie shop. That’s philately in English and its stamp collecting. I had no idea if stamps were still being collected let alone in France. My collection began with my Dad’s Uncle Ben. When I was in grade school his wife Aunt Mary passed her deceased husband’s collection on to me. My Dad threw himself into helping me expand his Uncle’s collection. We began buying stamps on approval which meant they were sent to me for me to pick through and return those I was not interested in. Those I bought were put on hinges and into my new Regent Stamp Albums.

When the mail order stamp companies kept inundating me with more and more stamps my Dad got fed up. The young lawyer gave me an early lesson in the law telling me that since I was a minor I had no obligation to pay for them if they were foolish enough to continue sending them to me despite my Dad’s stern instruction to the catalog companies to stop sending them. I’m sure that one long unopened group of stamps in my collection was never paid for. I presume the statute of limitations protects me from a fifty-five-year-old civil action.

This was the beginning of my interest in geography and history. So many of the nations in my huge album were already long gone by the time I began collecting. The 1960’s also saw the liberation of nearly a hundred new former colonies each of which could make a little money selling their exotic stamps to the world’s collectors.

For the next twenty years or more family members would send me stamps cut off of their envelopes for my collection. Claudia told me she still had nightmares about my soaking off stamps early in our marriage and taking up the entire floor to dry them on sheets of cardboard.

I took a break from my attic reorganization last week to soak off one last batch of stamps for the last time since about 1992. At that time I began other pursuits like writing and stopped collecting stamps all together once the post office put a permanent adhesive on US stamps making it impossible to remove them from their envelopes.

Here are some pictures I took of the soaking and drying process. After slipping the dry stamps into big fat books to flatten them I spent a couple days sorting stamps into glassine envelopes. 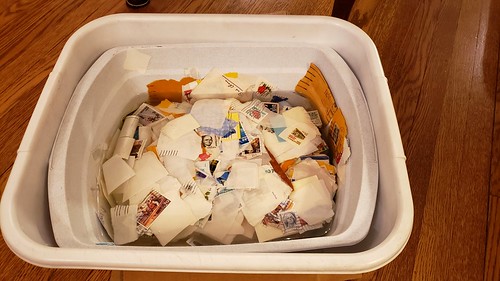 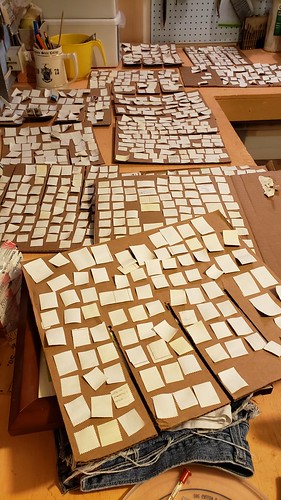 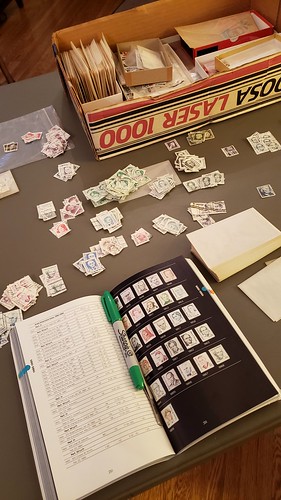 When I was in junior high school one of my Dad’s colleagues learned of my collection and mentioned it to a relative in Denmark who was a fellow stamp collector. The collector casually asked if I would be willing to send him any extra US stamps I had lying around. I was thrilled and pulled at least five or six hundred commemorative stamps out to send to him – an instant American collection.

I think the Dane was a little overwhelmed. He went through his collection and sent me a very respectable collection of Danish stamps including some that his thank you letter indicated were rare and valuable.

That planted a seed to find other collectors and build my collection. The idea never took root and I don’t intend to pursue it now. But who knows? I have a lot of stamps and wonder if my grandsons could be tempted into ebaying them off for a share of any income they might generate.

I tip my hat to Benjamin Franklin who, was among other things, the first Post Master of the United States.