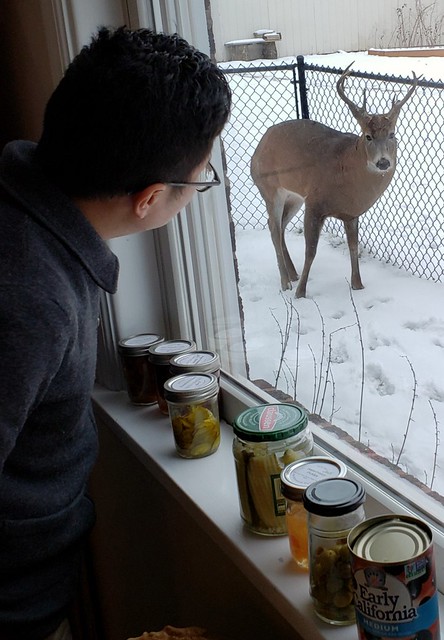 Grandma Claudia screamed as our our older Grandson sliced up onions for our Thanksgiving repast. Fortunately our Tan Man did not cut a finger off. His grandmother had bee surprised by a buck bedded down about six feet from our kitchen window. The stag stayed put for the next three hours. He and his mate, which we only discovered an hour later, stayed put as three carloads of Thanksgiving company spilled out into our backyard bearing more dishes for our meal. It was the most interesting holiday animal intrusion since election night 2016 when Claudia snapped a picture of a black bear lumbering up our back steps out of our patio. Considering the occasion that “guest” might have been Russian.

This is the day we celebrate the first day of Thanks celebrated by our Pilgrim forefathers with their suspect new neighbors the Indians of today’s Massachusetts. Over succeeding centuries the original inhabitants of America would shrink from sight in a sort of human displacement. Many of the Pilgrims successors now the view the North American continent somewhat possessively and many are so worried that the First American’s largest pool of Indian-ness, the largely indigenous poor of Central America, are going to re-inject Indians into a white population that is just shy of becoming a 49 percent plurality.

Something similar has happened to a lot of the original wildlife the Europeans first encountered. Eastern Cougars are close to extinct as are buffalo. The deer did somewhat better and enjoyed harvesting the vast new farmlands that the Europeans let loose on the land and when threatened with growing urban zones they began to take advantage of urban gardens as well. In Duluth they, like Canada Geese, have taken over huge swaths of land untroubled by the dogs which once roamed freely.

Cities were not always friendly to wild animal populations even though farm animals were once common urban sights. One wild animal had to be reintroduced into the urban environment and was brought back into the Cities the era of great urban parks. Today Squirrels now own the arboreal spaces. Duluth’s deer are following the rodent’s lead.

As to the displacement of one population with another the squirrel offers an interesting example. Unlike humans who all belong to the same species since the Neanderthals and Denisovans melted into the larger gene pool, squirrels come in several different flavors. The same Eastern Gray Squirrels that populate Duluth have also taken over England as a highly successful invasive species. I heard about it first on Public Radio a number of years ago. Its not that our larger Gray Squirrels have better weapons. They seem instead to simply be more territorial, like Trump Republicans. The more timid native Red Squirrels will simply avoid the territory colonized by the more aggressive Grays. As a result the Red Squirrels are, like their Red Human brethren in North America, becoming fewer and farther between.

Which reminds me of a favorite children’s hymn lyric I haven’t heard since Republican politics swept America. “Red and Yellow Black and White. They are precious in his sight. Jesus loves the little children of the world.” Notwithstanding the “self evident” truths of the Declaration of Independence’s second paragraph, Jesus must draw a line at miscegenation.

The Pilgrim’s first guests didn’t know what was about to hit them.