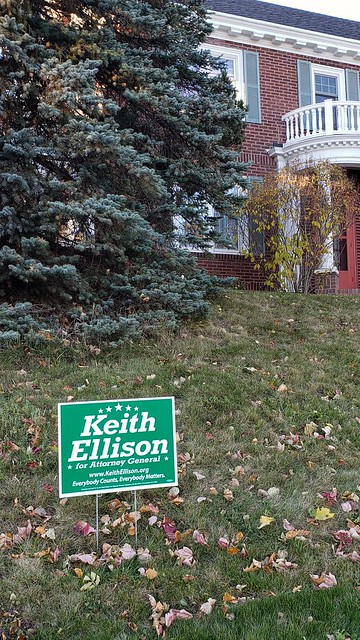 My better half, once a critic of Keith Ellison, was happy to let me put this lawnsign in our yard today. I’ve spent several days tracking one down putting calls into two City Councilors and waiting for the DFL office to reopen after it closed for a multi-day training session. It was Claudia who alerted me to the latest New York Times story which makes pretty oclear how the revenge of a jilted girlfriend has run Ellison’s campaign nearly off the rails.

His accuser claims to have a video showing Ellison pulling her off a bed which she has not shown to anyone, her lawyer, the former boss of Ellison’s Republican opponent, or an eager news media. But the media has managed to unseal court records of Ellison’s divorce which however, revealed, ironically, that Ellison was a victim of some abuse not the other way around. If you rely on the Duluth News Tribune you have seen innumerable stories suggesting that Ellison had mistreated his divorced wife. They have all been put to rest.

I bristle at an unfair dogpile. I couldn’t sympathize with Kavanaugh because I saw little likelihood that the charges made against him were untrue and besides that, he now has a life-time job. Poor man.

Folks in Duluth know how outraged I was for two years as a poisonous school administration and School Board majority manufactured allegation after allegation against my colleague Art Johnston accusing him of being a dangerous, violent fellow to justify removing him from office and costing him $75,000 in attorney fees to preserve the election that put him on the school board.

I’d really like to see the Duluth News Tribune give Keith Ellison his due and tell its local readers what the New York Times told the world about an honorable Attorney General candidate for Minnesota. While they are at it I’d like them to tell us what his Republican challenger recently said – that he intended to fire every Democrat in the Attorney General’s office. Sounds like Trump’s pledge to eradicate democrats from the Federal judiciary.

For years I have held dear my family’s story of my very Republican Grandfather George Robb’s example which is quite different from Republican Wardlow. When he was appointed Auditor of the State of Kansas in the 1930’s by Governor Alf Landon he had it in his power to do what Wardlow promises. I described it in a portion of a letter I sent toMinnesota’s State Auditor, Rebecca Otto. Here it is:

“…my Grandfather was the State Auditor of Kansas. He never lost an election. A staunch Republican George Robb defied his Governor, Alf Landon, who had appointed him to fill the vacancy of a publicly disgraced Democrat, by refusing to fire all the Democrats in the office. He kept them on because, as he told Landon, they were good people and knew their jobs. My Mother told me this story when I was young …….and lest you think my Grandfather was a fan of Democrats he told me when I was twelve that the worst mistake he made in his life was the one vote he gave a Democrat, Woodrow Wilson, who broke his promise to keep America out of War.”

I’ll be proud to cast my vote for Keith Ellison for Minnesota Attorney General.