A week ago I ordered some new eyeglasses for my trip to France. The old prescription hadn’t changed much but my lenses were a little scuffed after two years service. I got them before my visit to Israel if memory serves. (WARNING – this post includes a picture I took of a shot-dead Palestinian)

While waiting for my “about an hour” glasses I killed some time at Barnes and Noble’s where I found this discounted book: 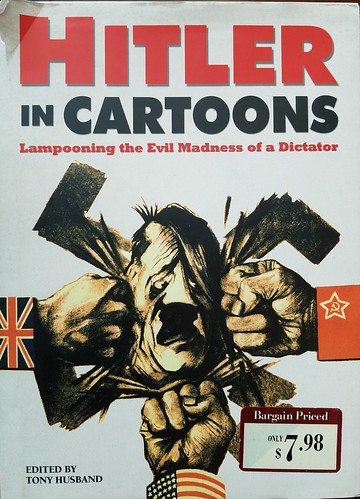 I am a sucker for good cartooning and cartooning history. I even have one on snow sculpting and this one began with a fascinating forward by author/cartoonist Tony Husband which gave cartoonists the credit for being the canaries in a coal mine of political analysis. Hitler kept a collection of the cartoons that mocked him and a black list of the cartoonists he would deal with after taking over the world. Today’s cartoonists also have a larger than life buffoon to caricature. I tried doing him in snow. Folks who saw my old Bill Clinton On the Road video heard me say I always wanted to be a cartoonist.

Hitler Nazi’s cheated to get elected in 1933 and the darned Republican Party has adopted the old southern Democrats voter suppression laws which prevented black voters from casting votes. Its one way the Republicans have shored up their shrinking majority and they are getting help from an emerging Republican majority on the Supreme Court to enhance and support this suppression. The Court let big money into campaigns with the Citizen’s United decision. The Court ended Federal intervention in states with long histories of racist voter suppression. Time after time the Court has OK’ed state laws restricting voter access in areas of poverty and high minority residence. And now, Donald Trump is promoting some of the worst offenders, among them Secretary of State Kris Kobach in Kansas and the even more despicable Brian Kemp in Georgia.

These efforts at wounding Democracy in all the Red States are next of kin to fraud and dictatorship. The Book on German cartoonists shows early critiques of Nazi’s suppressing votes. I have always felt that an honest election is far better than a winning election. If you stand for something you should be prepared to lose while standing up for your cause. Republicans are no longer willing to take this chance even though fair and honest elections have generally kept the nation on the straight and narrow. By suppressing the majority under the guise of “the rule of law” you create dangerous bitterness and paranoia. The GOP has done a masterful job of denying the voting majority from expressing its will since the Supreme Court overruled the Florida courts ability to enforce its own elections in the 2000 Presidential election. Donald Trump is poised to further poison voter confidence in honest elections and he’ll have Pete Stauber there to back him up if he gets his way.

VOTE WELTY, a Republican for Democracy!