Donate to Harry Welty who wants to remind his party that it once was the Party of Lincoln and would do well to return to legacy and tradition of its principal founder.

Here’s the email that prompted me to add this button pronto:

I hope you gain traction in your primary challenge to Pete Stauber. It’s a delight to imagine a Republican on the ballot in November who is running against President Trump. I’ve never voted in a Republican primary before, but I would consider doing so just to vote for a self-described “Republican Socialist” who wants to take on the “prolific liar and cheat” that is the current leader of the Republican party.

Instead of your blog as the kite to catch lightning in a bottle, I hope you consider producing short, shareable videos on Facebook, YouTube, etc. While it’s sad that soundbites, viral videos, and cable news yammering are the stuff of democracy these days, I think it’s also the stuff that brews the thunderstorms you are hoping for. Video could reach more people who crave your message.

I wager that media types are tired of primary election stories where candidates on the right and left are trying to out-right and out-left each other. Boring! Sad! But a Republican candidate running aggressively against the president during midterm elections? I’d think that a TV network or two would want to get some of those on-air fireworks!

I appreciate your thoughtfulness on the issues, but it’s your catchy turns of phrase that seem really made for video: e.g., “I now have 73 days to unmask the allies of a Man who put an outhouse over the Lincoln Memorial.” Perhaps your combination of in-depth policy discussion, quotable snippets, and assertiveness in challenging orthodoxy would get shared widely in online video format. If you do that, I wish you more of the on-camera future of Ron Paul rather than Mike Gravel.

Here’s that first video followed by an irresistable offer just like you’d get for a donation to Public Television.

And what could you get for a $50 donation? How about a book that is mostly authored but that just hasn’t been put together. It will be composed of some of Harry’s memorable essays blog posts and other scribblings. I’ve just been going through a few of them that I’d almost forgotten about and discovered they were pretty thought provoking and or entertaining. Here’s a sample that cracked me up again this afternoon, “My Tighty Whities.”

I know, I know. Most of this is free and already on the web. But my book/compliation will come with my autograph soon to be prized as the signature of the man who rediscovered Abraham Lincoln and reintroduced him to a cynical America.

I like to spread out my collections be they snow sculpture trading cards or thank you letters for being on the School Board out on my office floor to visualize. Of course spreading out my thousands of blog posts isn’t an option but I did spread out the 150 or so columns I’ve written for the reader. If they averaged 800 words that would amount to 120,000 words and that’s just printed columns. 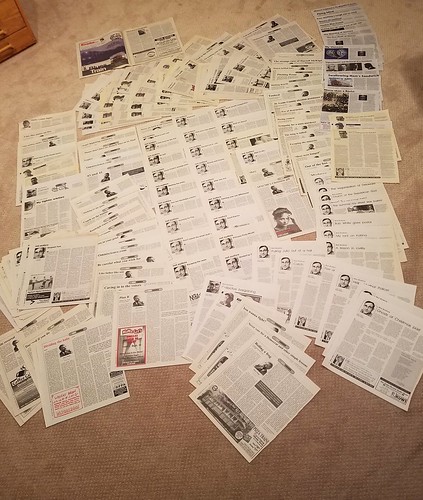 As for my posts…… that’s a number in the stratosphere. Hence the book title “TLDR Harry” as a nod to a generation in a hurry. Here’s some TLDR that’s not too long. Here’s what the acronym stands for. I’m definitely TLDR.

And my picture keeps changing to keep up with the times. Here are some past examples. 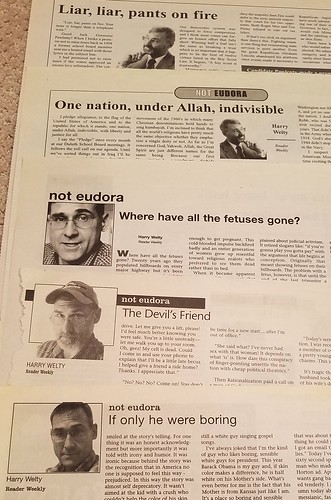