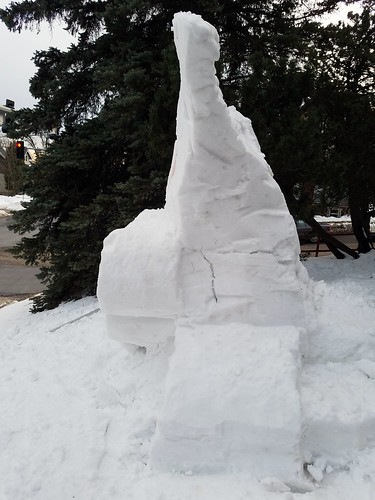 My children and my wife make sport over me whenever I began talking about natural phenomena. They all call out “glaciers!” when I get going. That’s because I got overly enthusiastic once when my kids were little explaining how even now, ten thousand years after the mile thick glaciers retreated under the sun the ground in Minnesota continues to recoil upward. Its just like a mattress after a sleeper leaves the bed. Its only a very little annual recoil, but still.

Gravity is having the opposite effect on my snow sculpture outline map of Minnesota. In concert with the sun it is pulling it down and making it squatter. I wouldn’t mind that so much but because I undermined the area under the Olympic rings it began a slow topple towards the hill below it. The picture in the last post from last night was taken after I was satisfied with its appearance. Half an hour later I looked out my front window to check on what seemed a dicey situation and discovered a fist-wide crevice half way up the sculpture where Minnesota was about to break at about Hinckley’s latitude. Instead of joining my wife to pick up our grandsons from school I raced out to prevent a disaster like California’s sliding into the Pacific.

Before I could pause to take the picture above I first shaved off much of the snow in the top front of Minnesota removing it five or six inches deep to take the weight off below. Then I replaced snow under the rings to give the lower sculpture firmer support. Then I punched holes in the back where the rift had opened up and shoved more snow inside so that there would be less of a void along the back of the sculpture.

In the process of doing all this the Sculpture suffered. The sides and circles got dinged and scraping away so much snow from the front exposed the Cat in the Hat. The cat portion was faded pink and an ugly blemish. I decided that the quickest fix was get out more red dye/paint and make the blemish a heart, rather like the one discovered on the proto planet Pluto. (that’s fun to say although it may be a dwarf planet)

That didn’t work out so well. The snow I painted was wet and in short order the valentine became a bleeding mess. One of the editors at the Reader came over to snap a picture and texted me to ask if the bleeding heart had been from a vandal. I sent him the clean picture but it was too late for it to become the front cover of this week’s Reader. Working on the sculpture may also have cost me my column in the Reader. I had thought I could get it done quicker but frittered away the afternoon that I had planned on using to write the “Wayning of America.” I turned it in at 9 PM and in my subject heading I simply typed, “I hope its not too late.”

If it is I’ll just put it in the blog.

This morning I scooped up some snow, put it in a plastic bin and took it to my basement to warm up. I also dug out the offending red blob and tossed it under my spruce tree. I used the melted snow to fill in the crater. I think the chances that Minnesota will last one more day have improved to 50/50. I wasn’t sure it would last overnight but it did with some new narrower crevices still visible this morning. The colder evening temps have stabilized it a little.

I’ve confessed before that I don’t mind the attention that my snow sculptures generate any more than an actor opposes applause. The loss of the Reader front cover has been made up for by Facebook. The preceding post is essentially what I put in Facebook 18 hours ago. Since that time it has gotten over 500 “shares.” I don’t recall getting 10 or 20 for any previous post. Its a felicitous sculpture on a subject dear to the hearts of any Minnesotan – our Olympic representatives. I suspect their success helps make up for the blowout loss the Vikes suffered in the Conference Championship before the Superbowl.

I’m enjoying my moment in the sun too; more so than my sculpture which will soon melt away.