… unless I start seeing some lightening on the horizon for my bottle, I’m going back to studying French.

I haven’t even deposited my lonely $40 contribution. I’ll do a mock up of a Stauber/Trump ad and see if anyone wants to help me spread it through the District’s newspapers but I’ve still have almost two months for that.

I have not been keeping up with my occasional Diary entries for a while although writing about my “campaign” serves that purpose. I’ll add a couple of other items.

Tonight is Friday and my sweetie went off to bake pies at church for tomorrow’s Rhubarb festival. We are advertising it on our conspicuous lawn. I had put up an old Campaign sign that explains why I would be such a breath of fresh air in Congress for the reporter at KBJR who shot a picture of me carrying it through my house and putting it in our front yard. Claudia put up her rhubarb right next to it. Rhubarbs and honesty go together very well. 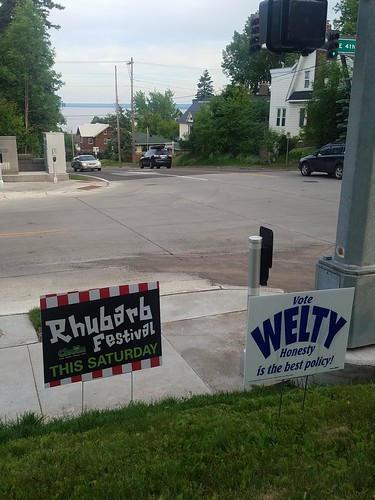 I’ve spent about three hours studying French the past two days for the first time in a couple of weeks. I have managed an hour a day for the past 115 days straight but France is coming up in less than two months and times a wasting.

I finished reading the book Is Paris Burning and am half-way through another one the peculiarities of the French people. I have also been listening to Rick Steves podcasts while putting together a 1700 piece jigsaw puzzle of Paris to get a map of it in my head before we arrive.

Family life continues apace and I’ve signed up at church to sing a duet with my daughter for an August service.

I’ve been holding off writing that post on abortion I promised a couple days ago because the subject is really about the part played by Republicans in making America a very divided nation in their zero sum approach to winning elections. Their folks won’t vote for baby killers. Of course they follow the Apostle Paul’s exhortation to honor the law which means separating kids from their families. That’s the Christian ethic that made Hitler such a success!

And today Claudia and I took in the antidote to the blackness of Donald Trump’s soul at the Zinema Theater and watched “Won’t you be my neighbor.” Bring tissues if you go. Such decency purged me of some of the bile left over from the President’s self promotional visit. Talk about clothes pins!