I was surprised to find I had 19648 steps on the pedometer today. I got a late start but kept working until dark and rain descended. I came home wet. I passed out a lot of flyers today filling in missing gaps in the region between Kenwood and Duluth Heights. I only have about five days of flyers left but I’ve ordered more which should be available by Monday.

On one of the roads I found a stand of beautiful blue flowers with an aspen backdrop. I have no idea who planted them but I deemed them worthy of a picture. 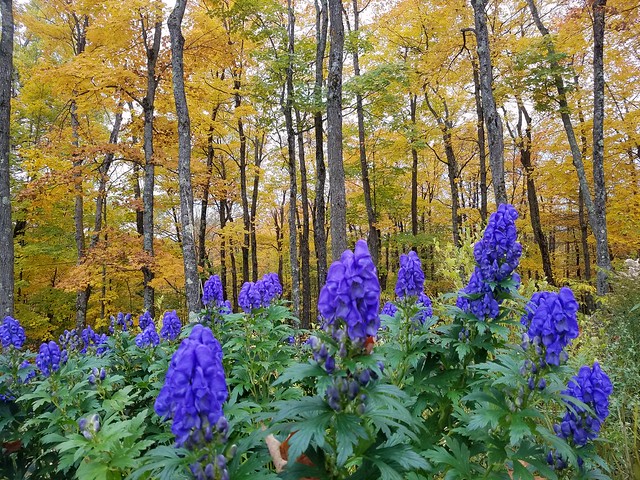 I don’t seek out conversations but every day I meet more people who have their own little slice of the public school pie to share with me. I’m on the right track. So is Loren Martell. A sample:

The narrative the DFL is selling–the great fallacy of this campaign–is that the conversation should have nothing to do with the past, that what happened over the past decade is irrelevant. In fact, in the DFL’s narrative, any glance in the rear view mirror should expose only one villainous group–the powerless Board minority members, like Art Johnston and Harry Welty, who were speaking the truth.

Blaming the people who had no power in the room is like blaming creditors who bring up the bills for a bankruptcy.
As the dominant, majority voice, it was the DFL-endorsed who rubberstamped Keith Dixon’s spending spree. It was the DFL that blew a thirty million dollar reserve fund, jacked the tax levy by $19 million, concocted a debt payment plan that robs more than $3 million annually out of classrooms to pay for swimming pools, and left the district so broke it had to raid its already pathetically under-funded maintenance fund.