. . . Spirit Mountain Days. I had two people correct me about that faulty post.

I attended the “family day” part of it late this afternoon and had a blast. That makes today my first official day of pressing the flesh. And most of it was with kids except that I didn’t offer them my hand to shake I offered them one of my trading cards. 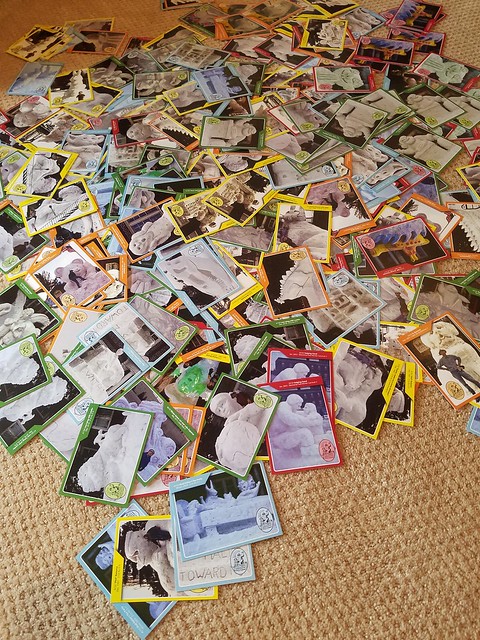 Here is a picture I took of them this afternoon mixing them up so I could hand them out randomly at Memorial Park. One of the cards has a snow sculpture that I made 15 years ago at the park for the Spirit Valley Winter carnival. Valley, Valley, Valley! Got to get that right.

I told the kids that they were “snow sculpture trading cards” and the kids were so nice and polite thanking me for giving them the cards. “Did you make this?” was a typical reaction. To their parents I would say, “They are really political literature disguised as trading cards.” The parents seemed amused except for one fellow, a civil engineer, who wondered how I found the time to make them. “I had thirty years to make them” I sputtered. Then he turned around and pointed to the pile of pea rock by the Laura MacArthur playground and asked why the School Board had spent a million dollars to replace perfectly good rubber tire mulch that protected kids from falls with wood chips. I was not prepared to switch gears……not with a civil engineer! Heck, he told me, even California hasn’t said rubber tire playgrounds were unsafe and they think everything is bad. “Democrats!” he said, summing up his disgust.

Rubber tire mulch or not this is going to be a fun campaign. After I got back home a friend brought me some wire stands for my lawnsigns……I’d given all of mine away after the last campaign. Then another friend called to tell me that he/she would be putting an ad in the Duluth Reader sticking up for me next week. And I’ll probably have all that I need to start going door to door by Wednesday or Thursday. Maybe I’ll even find time to do some fundraising.

Anybody want to donate to my campaign for a deck of snow sculpture trading cards?