Alanna Oswald told me yesterday that she might not to vote for me because of all the posts in which I whine about having to campaign instead of writing about my Grandfather. She says my getting off the School Board might be the only way she gets to read that book.

Its a tough choice. I’d love to compare George Robb with his fellow Kansan, oil billionaire fifty times over, Charles Koch. My Grandfather was a rock ribbed Republican but Koch is making it his business to roll back not only Lyndon Johnson’s Great Society AND FDR’s New Deal BUT the trust busting reforms of Teddy Roosevelt. Koch truly wants to take America back 100 years to the Gilded Age and Jim Crow. Perhaps that explains the jarring video I saw the 82-year-old Koch along side our Era’s Stepin Fetchit Snoop Dogg. Koch is a lot more comfortable with a black idiot sidekick than a sober and brilliant Black President taxing his billions and restraining his pollution.

Hell, when I was exploring the Kansas State Historical Museums files on my Grandfather I got a peek at his old College scrapbook which gave a pretty strong hint that my then 21-year old Grandfather liked Teddy Roosevelt. He pasted in a flyer from Park College’s Teddy Roosevelt Club into the book the year the ex-president’s Bull Moose party challenged Wilson and Taft. It was probably Koch who talked right-wing talk show host, Glenn Beck, to denounce Teddy. Beck was regularly invited to attend Koch’s soirees to return America to the days of John C. Calhoun and State’s Rights.

But as tempting as it is for me to try to save America with a boring reminder of a more decent political past, my Grandfather also set another standard before me when he fought in the Great War. As the lyrics to one of his Era’s war songs put it “…and we won’t come back till its over, over there!” I’m afraid that my school board work is not over either.

My Grandfather’s war lasted about one year. Mine began 28 years ago (if not earlier) when I first ran an unsuccessful race for the Duluth School Board in 1989. That was two years after moving to our new home on 21st Ave E and my Daughter Keely’s request that I build a snow dinosaur. I was reminded of this a week ago when visitors asked if they could look at my scrapbook of a 30 year snow sculpting career. 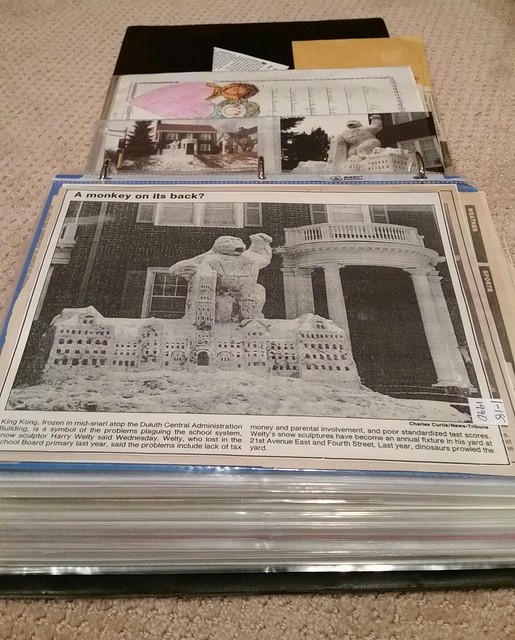 Following my second failed attempt to run for the School Board I decided to make a not so subtle comment about the struggles of the Duluth Schools in 1991 in snow. The DNT’s head photog, Chuck Curtis, snapped a photo which made it to the Front Page if I remember correctly. A passerby with a camera took a photo of me sculpting it and sent it to me afterwards. Until the advent of cell phones Claudia and I got used to flashes coming through our drapes on winter nights from folks dropping by to take a picture of our front lawn to mail to their friends in warm weather states. 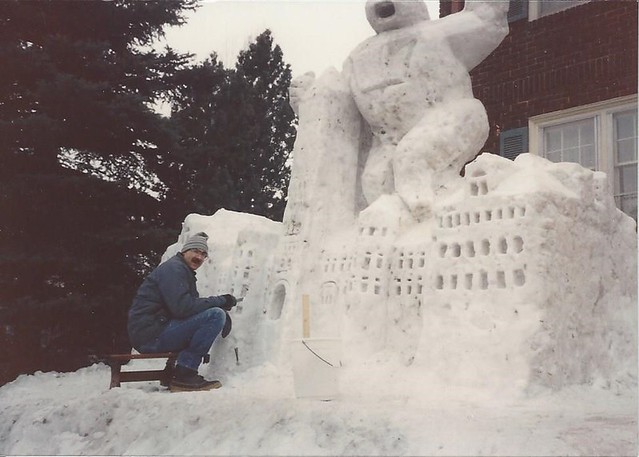 Like my Grandfather I conceived of my campaigns for the School Board like his Meuse-Argonne campaign. I ran a third time and lost that election as well. As a consolation Claudia gave me a small black figurine of a disconsolate Gorilla sitting chin on hand like the thinker for my birthday. That became my inspiration for yet another snow sculpture and perhaps an augury for a change in my political fortunes. 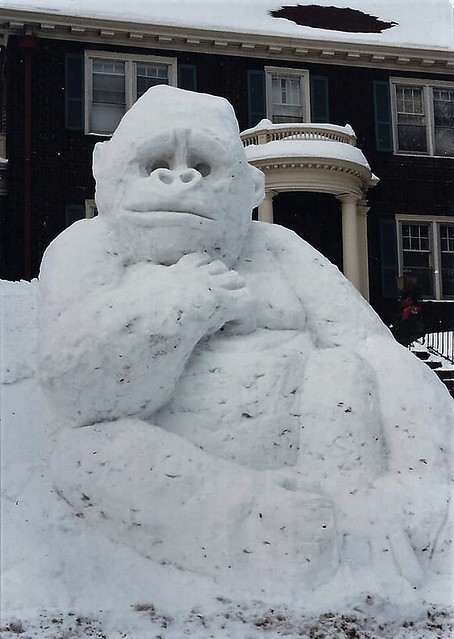 This sculpture was the first of a couple which made it to newspapers on the Associated Press circuit.

By now I had a name for my gorilla. Phil. It was prompted by yet another gift from Claudia which came with a card inspired by the cartoonist Gary Larson: 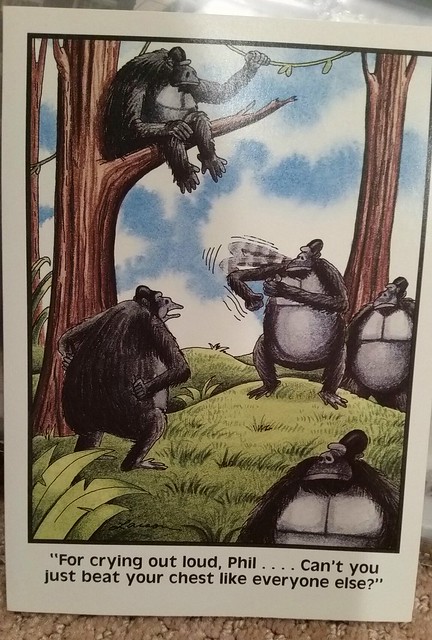 After christening Phil I decided to attach a story line to him. He became my “campaign manager” who couldn’t get me over the finish line. I pinned the blame on him in a letter I penned to the News Tribune. That’s in my scrapbook too and for school board wonks its a most interesting peek back at our school district’s history. 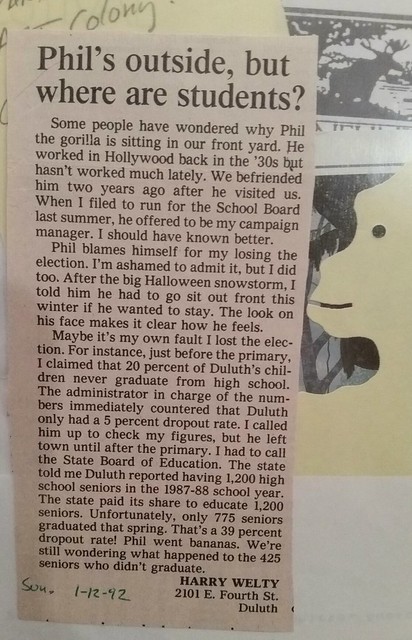 What I wrote is the gospel truth. In the 1987 school year (the year in which, by coincidence, I lost my teaching job) our school district reported that we had 1200 seniors. And yet only 775 seniors graduated. We were paid by the state of Minnesota to educate 425 students who seem to have vanished into thin air. It was school board counselors who told me to check the numbers and they were confirmed by an employee in the Minnesota Department of Education. Sadly, the MDE didn’t lift a finger to call the District on the carpet. It was a preview of how they would handle the preposterous financing proposed for the Red Plan.

Discovering that public school administrators would lie was as shocking to me as it was for Loren Martell to find himself handcuffed for addressing the Duluth School Board during the Red Plan. Its the sort of experience that turns concerned citizens into ever vigilant watchdogs. Its been my Meuse-Argonne ever since.

I thought I had left the School District in pretty good shape when I retired from the Board in 2004. Three years later, after the voters were denied a chance to vote on the half billion dollar Red Plan, I realized that if I could get elected again I could put the issue before the voters. I was prepared to offer a smaller plan should that referendum fail. Instead, the Dixon administration worked hand in hand with my critics to attack my motives and those of Gary Glass. In doing so school administrators passed on one more great lie – that Johnson Controls would earn no more than 4.5 percent of the building program’s cost. Throw in the wildly incorrect promise that the Red Plan would barely increase property taxes and you can see how my vigilance was rekindled.

The travesty of seeing my colleague Art Johnston raked over the coals has done little to restore my faith – especially after it become evident that 30% of Duluth’s eligible ISD 709 resident students have left us. Golly! We’ve got new half-billion dollar schools to fill up and maintain and we are not succeeding at either objective. I’ve got five months to make a case for shoring up our schools even while my Grandfather’s life story begs to be told.

This began as a light-hearted reintroduction of my old campaign manager, Phil. I’m bringing him back.

Phil has given me the idea to raise money for my campaign by selling snow sculpture trading card packs in lieu of political propaganda. Goodness knows I’ve taken lots of pictures of my creations over the years. Here’s the first page of my scrapbook’s Table of Contents: 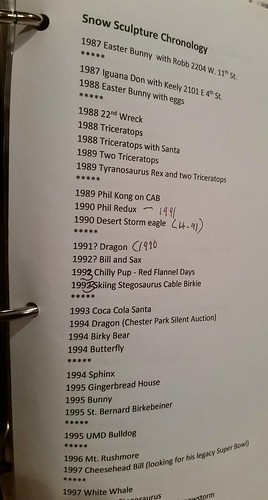 I’m going to do things a little differently. Rather than ask for donations by mail this year I think I’m going to offer the trading cards in sets of five to help me recoup my expenses incurred to defend Art Johnston. That was because the school board used the excuse of a nonexistent assault to remove him from the Board. My Mother’s death left me with a modest inheritance that allowed me to give Art $20,000 to help defray the $75,000 legal charges Art incurred to defend himself from the vile accusations hurled at him, to wit:

“Racism” (He was a member of Duluth’s NCAAP Board for crying out loud)
“Conflict of Interest,” for sitting in on meetings affecting the employment of his school district employed partner. Nevermind, that a Red Plan supporting Board member sat in on similar meetings when a relative ran a school bus into a child – the relative was given a desk job!
“Violence” Who wouldn’t be mad after serving five years on the School Board while constantly denied public data and then discovering that the School Administrator who recruited your last opponent was now orchestrating a spy network to harass your partner starting on the very day you beat the candidate that said administrator encouraged to run against you?

$20,000 is almost all I “earned” over my first three years on the School Board. I spent just as much trying to get a Red Plan referendum on the ballot. Its been expensive to pay for the honor of serving the public.

So, if I print up trading cards, I’ll treat it as a small business and use the proceeds to pay for my campaign. Maybe I’ll break even on the cards and avoid going any deeper into the financial hole to stay on a school board that has finally calmed down from the insanity of 2014 to 2015. Calmed down yes, but we still need to get out from behind a $3.4 million dollar a year eight ball that costs us 36 teachers.

It may be hard for folks to take Phil seriously as my campaign manager so thank goodness my old rival, Representative Mike Jaros, has agreed to be my campaign chairman. He ran a dozen or more campaigns and never lost. Having only won three of 16 campaigns for public office myself, I am in awe of his record.

I just can’t wash my hands of Phil. He’s been the logo above my old webpage for almost twenty years now. Like me, Phil deserves a little respect. 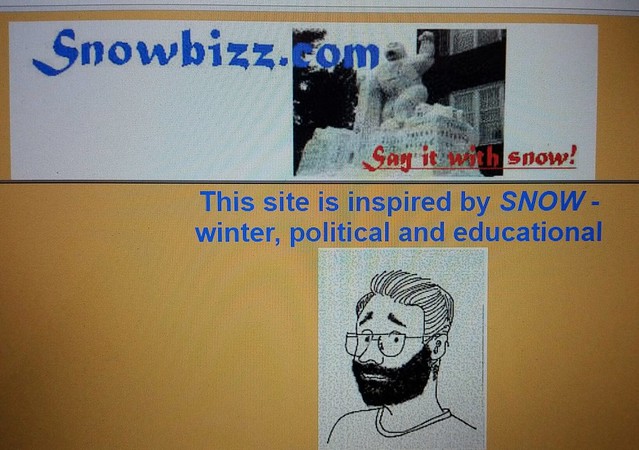