I find waking up in the middle of the night to mull over problems that can only be dealt with during the day very annoying. I really tried hard not to think about them at 1AM but its 3 AM now and they are still keeping me awake. So here’s the link to my current cause for insomnia.

Its a pdf on the School District’s website and I’m irritated that I can’t simply copy the words and paste them here but I could take a picture from my computer screen so this is it: 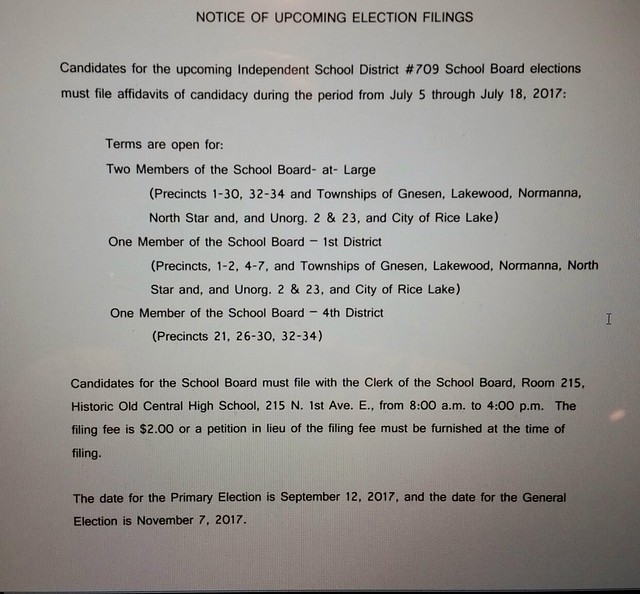 If next Tuesday wasn’t July 4th I think it would be the first day of filing but July 5th works for me and it may very well lead up to its own sound and fury as the school board election draws near.

Potential candidates have two weeks file and as it stands now there aren’t enough announced candidates for a primary but only for the general election. At present there are four candidates for the at-large positions currently filled by Annie Harala and your’s truly, and two candidates each for Rosie Loeffler-Kemp’s 1st District and Art Johnston’s 4th District. Some other candidates must add their names to the list if there is to be a primary election in September.

Former Chair Harala has worked hard to recruit challengers for Art and me. She works with two of my challengers professionally and met with Art’s challenger a couple times before Mrs. Lofald announced her candidacy. Our Superintendent used to babysit for Jill, one of his favorite teachers, so there is little doubt that he has a stake in the election’s outcome this November. The four to three vote to extend his contract 3 years last December is still on his mind as it was in the Winter and Spring when he applied for so many other Superintendent vacancies. Now he and his supporters are working overtime to make sure the balance on the Board doesn’t change. He already indicated to me that he took my vote in the minority as a sure sign his days were numbered. I didn’t bother to tell him he was wrong but he was. Now he’s counting on this election to guarantee a full three years.

Frankly, I would be much more favorably disposed towards the Superintendent if he worked half as hard to make sure we were spending compensatory education dollars where our poor kids go to school as he has worked to keep his job.

Mr. Gronseth hovered over the DFL Endorsing convention all the time that I was there trying to be heard over a malfunctioning sound system. He let his true loyalties show when he came up behind retired chair Judy Seliga-Punyko, one of several ex-school board member delegates, and gave her a warm, lingering hug. He did everything he could a couple years ago to change the date of the 2013 election so she could serve an extra unelected fifth year on the Board. Judy was the last of the Board members who fought from the beginning for the Red Plan that chased 30% of ISD 709’s students to other schools but old loyalties run deep in the School District just as partisan ties run deep.

I’d like to think I could have gotten more than ten percent of the vote if the delegates had been able to hear my speech but there were probably far too many friends of the Red Plan and the public employees’ union at the DFL convention for me to have had any hope of endorsement. Fortunately for me, I’ve won three school board elections without any party endorsement. I’m counting on that streak to continue but every day the news coming out of the White House and Congress reminds me that there is much more at stake than what happens in Duluth. I would much rather write a book about the good old days when voters regarded political parties more like bowling leagues than churches. But every day that I put a post in this blog about our schools its time taken away from that book and time away from helping the nation get past the fossilized politics of gridlock.