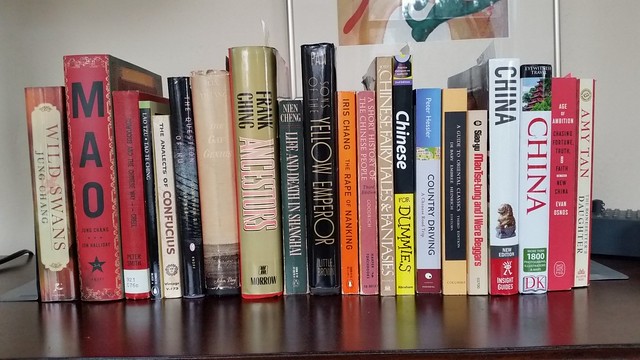 Again. A weekend with plenty of thinking and very little posting. Actually on Friday I spent a couple hours writing in an attempt to tie my reading on China today with America’s Gilded Age that I’ve also been reading about. One quick take away – plutocrats were a dime a dozen in both times and places. Another take away. American Government was in shambles. Is that true of one party China today? There certainly is a lot of order in Confucian China but there is much that is also unsettled. Anyway, I spent another couple hours tinkering with Friday’s work on Saturday before shelving it. I might post a vastly shrunken post on it later.

As for the rest of Saturday. I devoted it to China.

I long ago discovered that China was the other half of world history. I have a good handle on everything else but the Chinese language makes it hard for Chinese names to take seed in my brain.

I began keeping track of my serious book reading in 1979 when I read by far the largest number of books in a single year -30 of them. I’m not sure I’ve ever read as much as ten books in subsequent years. I occasionally bought books on China but I rarely got around to reading them. I got 53 pages into “A Short History of the Chinese People.” Taking it out again Saturday to see what I had previously yellowed out with a marker I found this:

“…Wang succeeded in cornering almost all the gold in circulation both within the empire and abroad. Even faraway Rome felt the drain, Tiberius (A.D. 14-37) prohibiting the wearing of silk because it was bought with Roman gold.”

I spent a couple hours on Saturday beginning Chinese for Dummies and finally understand the tonal system of Mandarin that I had mistakenly thought was strictly pitch based as in Do-Ray-Me. Time will tell how far I much I will pick up in the 107 days before I travel east. I finished reading the Osnos book to Claudia and began a book by Frank Ching I’d bought twenty years ago but through which I’d never gotten further than the prologue. I bought it for $4.98 on a remainder pile because it looked interesting. Indeed it is. Unlike the last two books on China in the 2000’s, Ching got in on China at the opening of China immediately after Mao as a correspondent for the Wall Street Journal.

His book is not about China as it is today, although that comes through, but about his research into his Chinese Ancestors who have published histories (that escaped the book burnings of the Cultural Revolution) going back to the time of the Norman Conquest of England just shy of 1000 years ago. He begins with the grave he discovered of one of his earliest ancestors Qin (Chin) Guan. As I read it I couldn’t help but wonder if he was tied in with another Chinese personage I’d once bought a book about Su Tungpo. I’d never read far into “The Gay Genius” when I bought it for ten bucks thirty years ago from Atlantic World Books on 209 E. Superior Street in Duluth. It has a glowing recommendation of Pearl S. Buck on its book jacket which probably enticed me to purchase it. Frank Ching using the pinyin system writes the poet’s name as Su Dongbo. Su was Mr. Ching’s Great Grandfather’s times 33 muse and mentor. I’ll have to traverse over 800 pages to cover both books but I’ve pushed on with Frank Ching’s largely because it will cover one family line through the last 900 years of Chinese History. Its my latest read-a-loud to Claudia.

If China is to surpass the American economy in my lifetime I owe it to my curious self to find out more about this behemoth. Its been on my radar for fifty years since I got into an argument with my Gymnastic’s coach after practice waiting for a bus home. He interfered in a debate I was having with my Sioux-Norwegian Gymnastic teammate who subsequently married a Korean woman (Or was she Chinese?) and went into the Foreign Service from which he recently retired.

Claudia and I are making a little room in a downstairs bookshelf for all these books. Her reading list includes three Amy Tan novels and Life and Death in Shanghai while mine includes The Rape of Nanking and the Sons of the Yellow Emperor about the Chinese “diaspora.” Somewhere I also have a book on the Ming Era fleet that traveled to Africa a few decades ahead of the Portuguese. And of course, there is Wild Swans which I read to Claudia a couple years ago.