The image below helps cleanse Lincolndemocrat after the previous post.

I jotted down titles for about ten posts I wanted to write through the School Board conference which ended at noon on Friday. It remains to be seen if I will get around to any of them. I snapped this pic of our key note speaker, retired Minnesota Supreme Court Justice, Alan Page.

Thirty years ago he also spoke to the MSBA Conference. That was 1987 which was a pivotal year for me. I was sacked from my last teaching job. We moved to our current address. I made my first “public” snow sculpture. I began thinking seriously about running for the school board. I told my Father this in his last few days of life just after telling him I’d lost my third teaching job then “softening” this with the preposterous notion that I was thinking about running for the school board. It was a futile attempt to cheer up a dying man whose oldest son had just been fired for the third time in a short, disastrous teaching career. He told me solemly that he wondered if I had “will to fail” which broke my heart and caused me many years of deep self reflection. Then my Dad died during one of the most beautiful autumns I’ve ever experienced. My Dad used to pile us into the car to visit Hiawatha and Olathe, Kansas, to marvel at the sugar maples turning red. 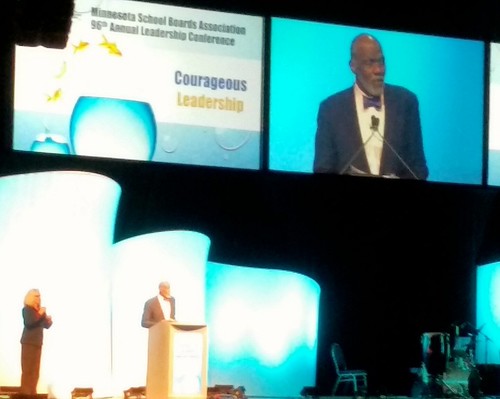 I used to watch Alan Page with my Dad but only in the playoffs where the “Purple People Eaters” couldn’t quite lift the Vike’s to a Superbowl victory in four attempts. As a college kid I was aware that Alan Page and the other Vikes drank at Mankato’s downtown bars where my future mother-in-law met and dated one of the coach’s who were using the state college’s facilities to train in the pre-season. Page was famous for carrying a huge purse like bag over his shoulders to the bars. Trust me, no one made fun of a people eater wearing a purse. Besides it was the “Age of Aquarius.”

I love to tell people that I threw a glass of water on Page. Then I explain:

The first time I ran across Page was at one of the earliest Grandma Marathons while Page was still a Viking. Claudia and were out near the Northshore mostly oblivious of the tiny new Marathon’s progress when we drove past a table on Hwy 61 just out of Duluth. We had already noticed other such tables on London Road loaded with water-filled cups for the Marathoners. No one was manning the table as a couple of runners were jogging up in the distance. For the heck of it we pulled over to hand the cups to the stragglers. One of them was Page who was running against the wishes of the coaches who didn’t want him running off any of his massive tackling poundage. As I lifted a cup to him he said, “throw it on me.” I didn’t argue.

Page read a thoughtful, sober-minded speech about his growing up in the shadow of the Football Hall of Fame in Canton, Ohio, with no childhood thoughts of a football career. Instead, Page, a 70-year-old like Donald Trump, recalled the impact of Brown vs. Board of Education on him as a black kid. (a frequent subject of this blog) Page told anyone who asked him that he intended to be a lawyer. (He probably has pre-law books in the handbag he took into Mankato’s bars)

During training camps his coaches did their best to “educate” their rookies by requiring them to the NFL playbook together. Justice Page told us that the hardest words in these book were “tackle,” “defense,” and “offense.” He recalled how six of the ten recent college graduates on the team struggled. It left Page to ponder their betrayal by an educational system that insured them a poor future after their star turn in the NFL.

Page also mentioned his thirty year old educational foundation which has spent $13 million to get struggling kids to and through college. In thirty years its helped 6000 kids.

He said he was distressed by America’s turn to Trump and alluded to the Trump Empire’s long legal fight to keep its apartments segregated in the good old days. Page is building bridges while Trump is building walls.