I think this is a riposte from my Buddy.

From: [Your Buddy]
Sent: Saturday, September 10, 2016 7:21 AM
To: Harry Welty
Subject: Photos Show Bill Clinton and Donald Trump Hanging Out

Not even The Donald and The Big He are always tribal.

And I’ll acknowledge that this tidbit is worth acknowledging. In fact, today’s Trib has dueling viewpoints on what a First Husband Bill ought to look like here and here. I didn’t read them but I have a lot of strong thoughts where William Jefferson Clinton is concerned.

Oh he’s a rascal all right but I’m not amused or besotted by his charm. I devoted one of my best snow scultures to him right after he was first elected and said nice things about him. I even pissed off untold numbers of Ross Perot supporters I’d been working with when I decided Perot wasn’t up to the Presidency and hopped off his bandwagon.

I’m sure if you type Bill Clinton into my search engine you will find a couple disparaging remarks I’ve made about him. In my emails to my Buddy I passed on my suspicion that our ex President raped a woman while he was Arkansas’s Attorney General. A few years ago reading my favorite blogger Andrew Sullivan I was directed to a story suggesting that both Trump and Clinton hobbed nobbed together on some Multimillionaire’s Caribbean island where underaged girls were available.

If my Buddy thinks my disgust with Bill Clinton’s mores will put me off of Hillary he’s wrong. Don’t get me wrong. They put me off but people are endlessly fascinating. Clinton was a competent President and I believed him years ago when he said Hillary was even smarter than he is – just not as publically charming and facile.

Hillary’s sins were often petty as for instance when she told reporters that she wanted to do more than bake cookies. As a house husband myself when she said this I was mortally wounded but I got over it. Yeah, she didn’t make evidence on Whitewater easily available and she and Bill obviously bent the rules to make ends meet and she turned a blind eye to his infidelities. For Republicans, as I told my Buddy, the primary sin of the Clintons was acting like Republican policy makers. That undermined the whole GOP schtick about bleeding heart liberals bankrupting America. He reformed Welfare for God’s sakes! Who did he think he was? Ronald Reagan!

I’ve also told my Buddy many times that I was tired of the Clintons and wanted them to just go away. Ditto the Bushes although Donald Trump makes all the Bush’s look like saints by comparison. I stopped talking to my wife about Hillary. She was wounded eight years ago when I was rooting for Barack Obama and disparaging Hillary. My wife can’t help but see a lot of dyspeptic mysogyny in the way Hillary has been treated and Claudia identifies with it. Claudia’s elementary school teacher wouldn’t let her give a little speech about her desire to be a space scientist. She was told to give a speech about being a nurse or a teacher. Claudia refused to give the speech her teacher wanted. Its high time for a competent woman to be President of the United States and no one in our benighted age is as smart as Hillary Clinton like her or not.

Even in 2008 I had to give Hillary credit for having earned a shot at the Presidency. She was no longer a First Lady but a United States Senator from the Empire State – New York. All her Republican Senate colleagues made it clear that she was a hard worker and whip smart.

The great irony of the 2008 campaign was that the pundits of the GOP, especially Rush Limbaugh, said wonderful things about Barack Obama to stick it to Hillary who had been their bogey woman for years. The political calculation was crude and obvious. If the Democrats were stoopid enough to nominate a “N” America wouldn’t elect him to the Presidency and their Republican candidate would win the day despite a disaserous end to the George W Bush Presidency. America fooled them.

For the past few years I’ve told Claudia that Hillary had a shot at the Presidency. She kept tellling me it was too late – Hillary was too old. I wasn’t really eager to have Hillary be the candidate and I’m still tired of the Clintons. I’ll probably feel that way in 2020 if Hillary runs for reelection – if she gets past voters who consider her a “B.” But I am finding myself rooting for her to beat the Dickens out of Republicans who have made governmental dysfunction their calling card. They couldn’t stand that ugly word “compromise” any more than they could stand my being a RINO after they took over my party and threw out old liturgy.

I always sympathized with the Republicans of my Grandfather’s Era having to put up with the sainted Franklin Roosevelt and enduring his four successive Presidential wins. But I don’t blame the voters of either 1940 or 1944 for sensing that changing a horse in midstream during the world war was a bad idea. I won’t blame voters this year if they decide an insecure man who makes fifth graders sound smart by his repetitive use of two sylable words is not quite the brilliant fellow he constantly tells us he is. Frankly, I’m in awe of Hillary Clinton, both Clinton’s really, for their tenacity, durability, intrigue and ultimate success. By contrast Donald Trump is a dumb-as-a-stump chump who, treats his customers with W.C.Field’s disdain, “Never give a sucker an even break,” or P.T. Barnum’s guile, “There’s a sucker born every minute.” As for his panache? I’m afraid its only some rainbow sherbert he dripped on his Gucci sports coat.

BTW: I decided there was more work to do on Bill Clinton after I busted him. This was the finished product: 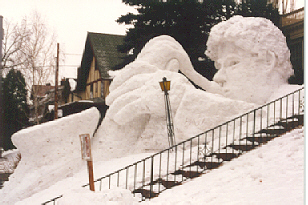