Last night after I parked my car in the garage I looked up to see a jet cross one of the few constelations I can easily identify – Cassiopeia. The other easy ones are the big and little dippers and Orion. The lights from the plane, had they been in my house, would have blinded me but being three miles up were only slightly brighter than the binary star Serius – the brightest in the night sky. Distance is everything in observing the stars.

I recently learned that of the paltry 5,000 stars we can pick out with the naked eye the farthest of these lies in Cassiopia. It is called Cassiopia Rho. It is 100,000 times more luminous than our sun. Its luminosity means we can see it despite its being 4,000 light years distant. I don’t know how many stars are within 4 thousand light year distance of Earth but apparently there are 600 million stars within 5,000 light years. 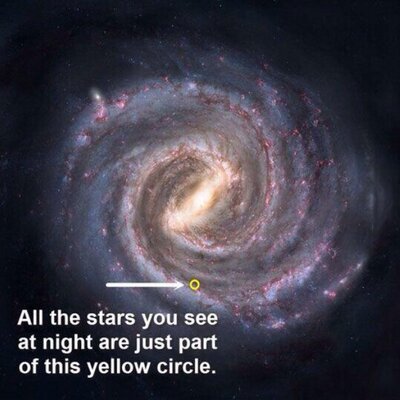 If mankind ever engineers a spacecraft that could travel at the speed of light (the limit without wormholes) it would take 4000 years to reach Cassiopeia Rho. However the fastest rocket ship we have yet devised travels as a small fraction of this speed (at 1/18,000th the speed of light) At this creeping pace it would take about 75 million years for it to reach Cassiopeia Rho. That is ten million years longer than the time elapsed since the extinction of the dinosaurs. And of course the furthest edges of our own medium sized galaxy are much further yet. The Milky Way’s width is currently estimated to be 100,000 light years and it is believed to contain 200 billion stars all but 5000 of them invisible to the naked human eye.

Superimposed on a picture of the Milky way the pitifully small circle of stars we can see is very tiny. I recall reading that we are fortunate to be investigating the universe at this point 13 billion years from its birth because we can still pick out galaxis that formed within a five hundred million years of the Big Bang. In a few billion more years the furthest of them will begin disappearing from even our most powerful telescopes as the Universe expands at a rate even faster than the speed of light. The light from the most distant object which began heading to earth 13.2 billion years ago comes from a place in the universe that is now 46 billion light years away. Light escaping it today will never reach the Earth. It is for this reason that astronomers say the universe will eventually grow dark. Our Milky Way descendents will be able to see the galaxies and galaxy clusters close to us for some time ahead but those farther away will simply wink out to us as we will wink out to them.

Not to worry – there are still lots of things for us to investigate before they are too far away to be seen anymore. There is an arresting illustration in the Discover magazine I opened up yesterday. It shows the leading edge of the Chicxulub meteor as it begins crashing into the ocean off today’s Yucatan Penninsula. But you can see its other end looming over the Earth nine miles farther behind yet to reach the impact site. The top of that meteor is up higher than the jet I saw flying through Cassiopeia last night.

The Rosetta Comet that we’ve been investigating is only about three miles at its longest point. That’s considerably smaller than the dinosaur killer. Even so, if you stacked it next to Los Angelas you would get an eyefull.