Winston sniffed me awake this morning in his sleeping quarters, my Son’s sunroom. I had to sleep diagonally in the guest bed but being a guest in his house for the first time worked out well. Hosting your parents at your new home is a right of passage. Winston and Clementine are my son’s cats. You British History nuts will know who they are named after. (Clemmie’s naming was my suggestion and I’m very proud of it)

After eleven hours on the road and a few stops I made it to St. Louis on my solo drive. Last month I traveled to the other side of Missouri, Kansas City. (I seem barely to have mentioned it in my blog) Geez, I see I’ve only mentioned Jeffrey Sammons once in my blog and that was last year. Gosh, I’ve been preoccupied with ISD 709.

Even today the first thing I did after rolling over from Winston’s attention was check my cell phone to see what the Trib had about the schools. There was a letter beating up teacher’s unions and a story about how teacher relicensure in Minnesota is underfunded. Oh yeah, and after the MPR exposé I see that Mesabi Academy is done for.

I parked the Big Objective here two days ago to make myself write it but I don’t feel like attacking it at the moment. So I’ll ignore it in preference to a little Harry’s Diary.

Not wanting to waste my drive time (and to stay awake) I asked Claudia to download an audio reading of a Jon Meacham book about Andrew Jackson on my cell phone to listen to while traveling. The book was available from the Duluth Library although I’d bought it a couple years ago and hadn’t started it. This may become a habit. I finished listening to McCullough’s Wright Brothers in March when I visited Kansas City – a ten hour trip one way.

Damn, I can’t believe I didn’t write more about that KC trip.

Well, anyway, this trip is to watch my niece and God Daughter get her high school diploma. That will be tonight and we will gather at my Brother’s home afterwards. That will be part of three days in a row with both my son and his girl friend and my Brother’s family. I’ll leave for home Saturday after a pancake breakfast.

Last night I took my son out to dinner and afterwards we scoped out my Brother’s new home. I called that get together to an end after my son, A Bernie Sander’s supporter, got into a heated discussion with my sister-in-law who supports Hillary. Its a good thing we didn’t have a brace of pistols handy or there could have been some Jacksonian fireworks.

Oh, and I don’t know why this popped up in my computer this morning but I found it interesting. In 2009 I posted this to my blog to show how many people were visiting it as I railed against the Red Plan: 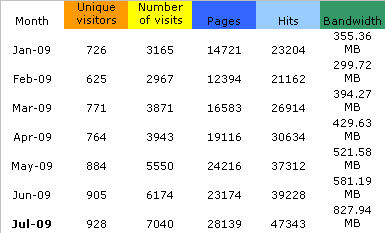 I ain’t Andrew Sullivan but I ain’t retired from blogging yet either.