When I talked to WDIO reporter Katie Nordeen after her interviews were over last night she told me that Tim Grover, my old friend and Nancy Nilsen’s replacement as School Board Chair, told her our letter was mistaken. For instance, the Board hadn’t taken levy money to pay for the building of the Red Plan.

Years ago Tim, in his anti-tax incarnation, made me put a gun to my head when I equivocated about opposing possible tax increases. He was a stickler for telling the truth. I am at a loss to understand how he can repeat the same drivel Nancy Nilsen spouts.

So, here’s my poorly drawn visual metaphor depicting the School District’s operating money as water in a bowl. Its low and the District wants more (for the classroom it says). It makes a promise to spend all the newly raised taxes in the classroom. Then, after the water level has risen (By the voters passing the operations levy) the Board borrows $5 million of it leaving less for classrooms. It borrows the classroom money to help finance the building of the Red Plan. 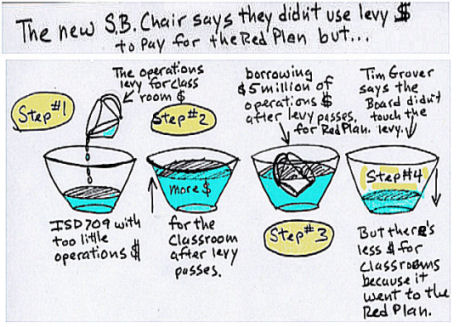