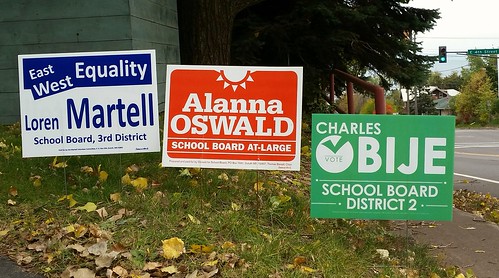 Today the Trib published my letter in support of Alanna – 201 words. I sneaked an extra one in but didn’t count to see if they knocked one out to keep it regulation sized:

Alanna Oswald was in my classroom when teacher/astronaut Christa McAuliffe lost her life shooting for the stars. The next year Oswald’s mother committed suicide. Denfeld’s teachers wrapped Oswald in a cocoon of caring and launched her, one of the first in her family, to college at Gustavus Adolphus. There was no way Oswald wouldn’t become a teacher.

I begged Oswald to run for School Board more than a year ago before our board plunged into a year of darkness and dysfunction. Oswald had just accomplished something that outshines everything our entire board has managed to do. She did it as a mom. She got Minnesota’s Department of Education to clean up Duluth’s long-neglected curriculum when she discovered that her fifth-grade daughter wasn’t being taught science or history the same way as children in eastern-Duluth schools. The motive was commendable. Her daughter’s school was desperate to escape Minnesota’s lowest state test rankings but did so by jettisoning a complete education. Oswald knows there are better ways to fight poverty.

In 1987, I wrote in Oswald’s yearbook that she was a lot smarter than me. She still is. We need her, I need her, on our School Board.

The writer is an At Large member of the Duluth School Board.